Ali Lee (李佳芯), Jeannie Chan (陳瀅), Harriet Yeung (楊詩敏), Zoie Tam (譚凱琪), and Matthew Ho (何廣沛) were invited as guests to Shaw Brothers’ Tiger’s Talk to promote their new drama Beauty and the Boss <愛美麗狂想曲>, which is currently airing on TVB’s paid streaming service. A highlight in the episode was when the topic turned to cheating in relationships, in which Ali and Zoie shared their personal experiences. 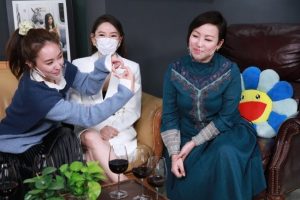 Hosts Christine Ng (伍詠薇) and Bob Lam (林盛斌) disclosed that they heard that Bosco Wong (黃宗澤) and Harriet were suspiciously close. Immediately denying the claims, Harriet joked, “I know that Bosco really likes my type and often talks about me!” As Harriet’s Chinese nickname is “shrimp head,” she joked that foodies like Bosco likes to eat shrimp heads.

When Jeannie pulled out her phone to call Bosco for confirmation, he joked that he has been in love with Harriet for 10 years!  Bosco exclaimed, “She keeps flirting with her eyes! But I’m annoyed because she never wears a low-cut top while flirting! She is known for her voluptuous figure, but every time I see her at work she is always dressed so modestly! If only she could wear a bikini in my living room, then I cannot hold it back and I’ll have to tell her ‘I love you!’” Harriet joked that Bosco has been unlucky because all her intimate scenes have been with Bob Lam.

Ali Was Cheated On

When the topic turned to cheating, Ali said that she is very insecure in relationships as she was cheated on by an ex-boyfriend who had studied overseas. “He was away for four to five years, and I did not date anyone else. He also claimed that he did not date anyone, but I sensed something was wrong when he returned.” When Ali later discovered another girl had taken a picture of her boyfriend’s firefighter key chain and thanked him for his support, Ali immediately broke up with him. “I don’t understand why he had to lie to me for so long.”

Possessing a low tolerance for dishonesty, Ali said, “When I was younger, if I found out that my partner had said even a little white lie, I would be heartbroken and break up because I felt that there was a stain in the relationship. My attitude has changed now as I’ve now reached a different stage in my life. I will analyze the situation first and consider if there was a reason for his lie, or whether I didn’t spend enough time with him.”

Zoie Was the Third Wheel

Without honesty in a relationship, it is easy to unknowingly become the third party, as Zoie discovered. At the time, her boyfriend had said that he had broken up with his ex-girlfriend. However after dating for a while, Zoie heard from someone else that she was actually the third party. “What hurt me the most was that he was really good at lying, and I completely believed him. I felt like I was struck by lighting, and I immediately broke up with him. We are no longer in contact even until this day.”

Understanding that it is difficult to judge another’s relationship, Christine brought up her controversial first marriage. She had a large age gap with her first husband, and everyone whispered that he was old enough to be her father. “I was 21 at the time. Even though he was older than me by 31 years, he only looked like he was in his 40s. He was talented, rich, and smart. He exuded a very masculine feeling, and that was enough to capture my attention and make me want to marry him. Many women like talented men. Once you fall in love, you’ll forget how old he is!”

Ali Lee Has Consensus with Boyfriend that Marriage Can Wait