Performing live singing with a group of students for this year’s Yan Chai Charity Show <慈善星輝仁濟夜>, actress Ali Lee (李佳芯) impressed the audience with her steady vocals this time round, after being labelled “Devil Sounds” for her shaky singing previously! Responding to questions from the media, she also expressed it was unlikely to reconcile romantically with ex-boyfriend Danny Chan (陳炳銓) as they remain good friends. 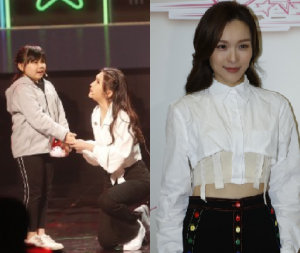 Interviewed, Ali shared that she has been practising singing all along since the pandemic, but did not have any chance to sing publicly until the recent charity show, when she was approached by first-time program director Lai Lokyi (黎諾懿). As there was a live band playing music this time, she was initially worried her singing would be drowned out by the music. “He (Lai Lokyi) said he wants me to sing as someone said I was “devil sounds”, so this is a chance to redeem myself, although (singing) remains a challenge and comes with its risks!” Using a singing key she is comfortable with this time around, Ali hopes that everyone will see her improvement since her previous performance.

Normal for Friends to “Like” Each Other’s Social Updates

Turning down the suggestion that her ex-boyfriend Danny turned up at her publicity event secretly to catch a glimpse of her, Ali denied this and explained that he lives in Tseung Kwan O and might just have dropped by conveniently. Unsure if Danny has been watching her latest dramas, she said that the two have still kept in contact and will also like each other’s updates on social media. On liking her ex’s posts, she said, “I will respond with likes when I see nice photo updates or meaningful prose from my friends, or even just to make them happy,”

Sharing that Danny will bring along their pet dog when they meet up with mutual friends, Ali turned down a reporter’s suggestion and said she can’t imagine the two of them getting back together again. Nor does not feel that Danny is keen on rekindling their romance, as the two “have always been very close friends”.

Ali spoke about why she broke up with her boyfriend of 6 years, Danny Chan.