Andy Lau’s Daughter Visits Grandparents in Malaysia Without Him 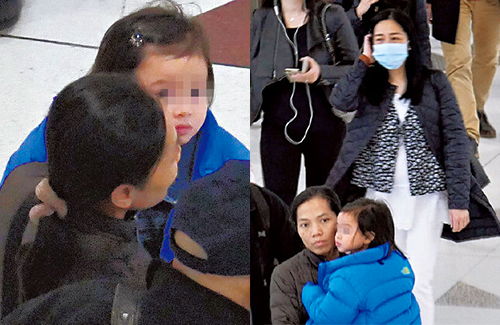 Lunar New Year is a time when family and friends gather together, but for the superstar Andy Lau (劉德華), he won’t be able to do that until after the season ends.

Though Carol was aware that they were being followed, she did not attempt to cover Hanna’s face or find another escape route with her bodyguards. Carol even stayed around longer to chat with some of Andy’s fans.

Hanna, who turns four in May, has large round eyes like her mother and a sharp nose like her father. She was calm while a domestic helper carried her, and even curiously watched some of the reporters that were following them.

According to reports, Andy and Carol would visit Malaysia at least once a year to visit Carol’s late parents. However, due to work obligations, Andy was unable to take time off to catch the same flight with Carol and Hanna this year, leaving the mother and daughter to pay the Chu grandparents a new year visit themselves first.

Another source said that Andy believed it would be better if he didn’t catch the same flight with Hanna, as he would most likely attract a crowd.

Nonetheless, Andy said he would be paying respects to Carol’s parents as soon as he finishes work. Sources say he would be visiting Malaysia in early March.