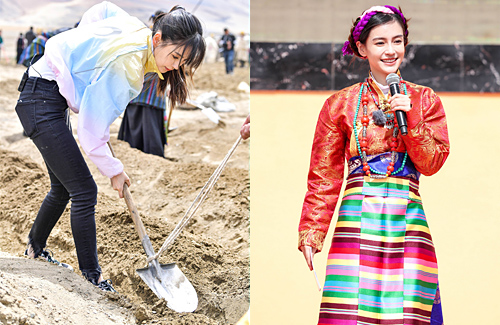 The actress visits Tibet as a charity ambassador.

In the third season of Mainland Chinese documentary program We Are In Action <我们在行动>, Angelababy (楊穎) joined the cast in Shigatse, a part of the Tibetan autonomous region, as charity ambassador.

The program aims to help alleviate rural poverty through tapping on the power of the media and also bringing together celebrities and entrepreneurs in practical efforts.

As part of her experience, Angelababy took part in local cultural practices, such as receiving the Khata (a traditional ceremonial scarf symbolizing respect), and learned more about local sustainability practices.

Upon arriving in Tigri County, she visited many local areas to see how the local villagers live. Trying her hand at planting potatoes, she enjoyed the joy of working together with other laborers

The cast also tried their hands at the farming practice of “chasing cows”. While the other ambassadors did not manage to elicit any reaction from the animals, Angelababy was able to get the cows to move by humming a Chinese melody, thus earning the title of “Little Farming Expert” from the locals.

Hopes to Help the Locals

A scenic region where locals led simple lifestyles, Shigatse is beset with economic woes due to its inconvenient traffic and challenging natural habitat, leading to low demand for the area’s agricultural produce, such as potatoes. Tasked with finding ways to uplift demand, the cast was understandably stressed out by the problem. When interviewed, Angelababy said she is keen to be able to help her Tibetan friends through her minuscule efforts, and expressed her wishes that the locals can enjoy a good quality of life.

TAGS: Angelababy, We Are in Action