The actress earned her own keep since she was around 15 or 16 years old.

Angelababy (楊穎) recently shared about her pay on her first job on a Chinese reality program, surprising co-star Kris Wu (吳亦凡) when she revealed she was only 15 years old at the time.

In a recent episode of FourTry <潮流合夥人>, Angelababy revealed that she earned $600 HKD for a shoot on her very first job as a magazine model. Not long after, she became a host for a Disney program in Hong Kong, for which she started earning a stable income of $4,000 RMB each month for a period of two years.

Kris Wu then asked curiously how old she was then, Angelababy replied, “Around 15 or 16,” which prompted a doubtful Kris to re-confirm her answer again. When she replied in the affirmative, Kris complimented her, “Then you are quite capable,” Angelababy then shared that she stopped receiving any allowance from her family since she started earning a stable income at that time, which earned the praise of numerous netizens. 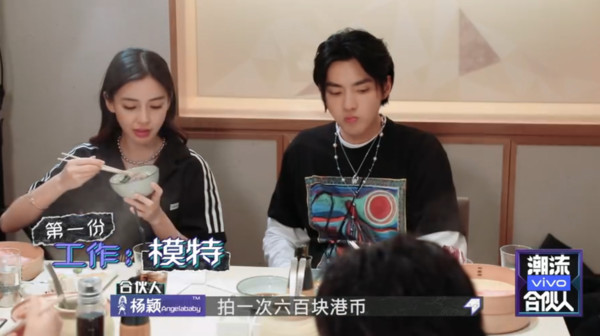