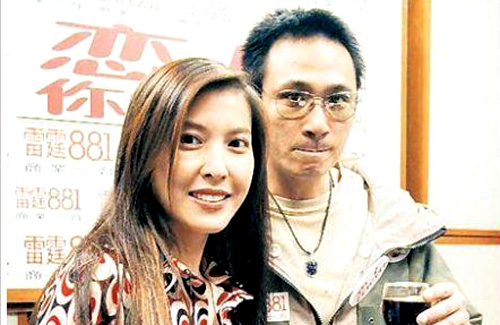 Anita and Francis were a popular TVB couple in the 1990s. They started dating after meeting on the set of 1989’s Everybody Loves Somebody <公私三文治> and partnered again in 1992’s Family Squad <卡拉屋企>. Both sitcoms aired to popular reception at the time.

After marrying her stockbroker boyfriend in Canada in 2003, Anita has since quit show business and moved to Vancouver. Now a mother of three children, 45-year-old Anita revealed her heart has never left Hong Kong as she often kept up with local news and entertainment gossip.

It is no surprise that Anita has been following recent hot drama, Triumph in the Skies 2 <衝上雲霄II>, in which ex-boyfriend Francis Ng stars. Anita was generous in her praises for Francis’ acting. She remarked that not only has Francis’ acting reached a pinnacle, he is also looking better.

After breaking up with Francis, Anita had also dated Kenny Ho (何家勁). She confessed that she was unhappy in both relationships. Unable to understand how her relationship with Francis could end after eight years, Anita looked to self-help books about love for answers. She admitted that she was partly responsible, but has since learned that women need to exercise forbearance and should not throw fits in every situation.

When asked if either of the men had been unfaithful to her, Anita did not directly respond to the question, but instead remarked that even if the other party had been unfaithful, it may have been partially her fault for not being able to keep the man by her side. She learned from her past relationships and even shared dating advice on her former Commercial Radio program.