Anita Yuen Learns to Say Sorry for Her Son 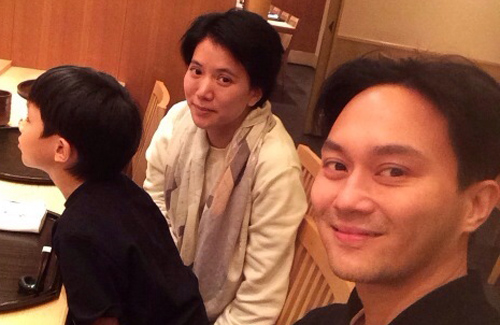 To be a good role model for her son, Anita Yuen (袁詠儀) said she has learned how to humbly acknowledge her mistakes. “I’ve learned how to say sorry for my son. He will see it, and learn it, and he will know what it means to be responsible.”

When the competition for the TVB Best Actor was still running rife last year, Anita and Chilam Cheung (張智霖) made a bet that if he lost the award, he would have to buy her a diamond bracelet worth $500,000 HKD. After Chilam lost the race and Anita flaunted her bracelet to her fans on Weibo, many netizens left negative comments on her blog, criticizing her sarcasm. Chilam’s controversial speech after he received his popularity award also angered many netizens, who claimed Chilam was being disrespectful to the awards ceremony and the other winners.

Anita heatedly defended Chilam on her Weibo, only to get more netizens to flood her blog with further negative remarks. Anita continues to defend her husband, saying, “He doesn’t really know how to make snarky comments, something that I may be better at doing. I had asked him why he said those words, and he told me that he was just speaking what he was thinking at the time. I believe him. What he said was pretty realistic.”

In regards to the netizens criticizing Anita and Chilam for their big egos, Anita said, “Everyone has the freedom of speech, but if you talk about my family, then I will definitely mind. If you are here to cause trouble, I will play along!”

Anita admitted that she knew the Best Actor award would not easily land in Chilam’s hands. She explained, “If [TVB] wanted to give the award [to outsiders], they wouldn’t have given it to Chilam Cheung, but to Francis Ng (吳鎮宇). He didn’t believe me so I had to explain it to him – compared to his screen time, relationship with TVB, the company’s administration and how they operate, [TVB] wouldn’t give the award to someone [like Chilam]. He believed me but he still wanted to bet with me. He fell into my trick.”

Defending Chilam from snide comments, Anita’s defensive nature was also apparent when she actively protected her good friend Christine Ng (伍詠薇), who was on the brink of depression when her drama, Beauty at War <金枝慾孽貳>, performed below expectations in viewership ratings last year. “She suddenly really cared about how others think of her, and she forgot what it means to find joy in acting. I really don’t want my friend to go into a dead end, so I put a damper on her hopes of winning…. I reminded her that if she did well, the audience would know it, not the awards.”

Anita is very well aware that her mouth tends to speak before her brain thinks, and she emphasized this more than once in various interviews in the past. Is Anita not afraid of upsetting others? “I shouldn’t say that I’m afraid, but I really don’t want to upset people. I’m working on it now. But I’m improving. I’ve learned how to say sorry.”

Anita said that it was her son that made her change for the better. “I want him to know what it means to take responsibility for your actions.”

Triumph in the Skies 2 <衝上雲霄II> pushed Chilam back into high demand, and Anita is grateful for Chilam’s success. Anita is satisfied with Chilam’s new management company. Anita, who would occasionally appear in films and dramas herself, said, “I’m not being lazy, but I have to take care of our son. If I leave a few months, it really affects him. He once told me that his classmates’ mothers all came to their lunch, but not his own mother. That hurts.”

The couple currently have one 7-year-old son, Morton. Anita confessed that she would like to have another child, but she and Chilam have failed to reach a compromise. “He wants to watch his son grow, and if we have another, he might not be able to do that.”