Anita changed her parenting style after learning it was doing more harm than good.

Married for 18 years, Chilam Chueng (張智霖) and Anita Yuen (袁詠儀) have always been a model couple. While many have the impression that Anita is the one who is more domineering in speech, Chilam revealed that he is in fact the caustic one, but has learned to restrain this side of his personality for the sake of family peace.

Adding that his son Morton (魔童) has also picked up this trait of speaking harshly, Chilam shares that Morton has recently become more aware of the power of words in hurting others, and is improving at getting along with others.

Anita Emotional About Son Growing Up

From taking care of a totally reliant newborn to seeing a baby take his first steps, motherhood is an emotional journey which might leave some mothers feeling somewhat bittersweet as their little one gradually leaves their protective embrace. Anita experienced this herself as 12-year-old Morton was preparing for his study trip with schoolmates to Beijing last year. Seeing him pack his luggage in an organized manner and preparing his own travel documents, Anita felt very grateful that he can take care of himself, but also appeared reluctant to send him off as she knew would be away from home for some time.

Learning to Put Away a Mom’s Ego 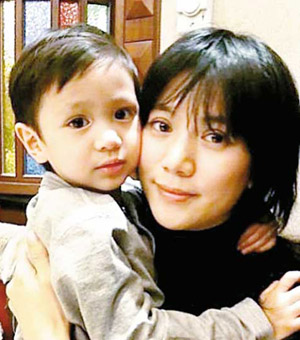 When it comes to parenting, Anita was initially very strong willed and insisted that her own method is surely right. A few years ago when Morton suddenly told Chilam that he “wanted to have another mother,” Anita still felt that it was Morton’s problem.

As Morton exhibited problematic behavior at that time, such as a lack of concentration and disturbing his classmates during class, the school felt that these might be symptoms of attention deficit hyperactivity disorder (ADHD) or autism, and advised Anita to bring him to a child psychologist.

After seeing the psychologist, it dawned on Anita that she was the source of the problem as her egoistic and self-centered parenting style affected Morton negatively. Listening to the psychologist’s advice, she took pains to repair her relationship with Morton. Mother and son eventually developed a close, friendship-like bond. This finally made Anita realize that parents may not always be right, and there are times when they have to listen to their children as well.