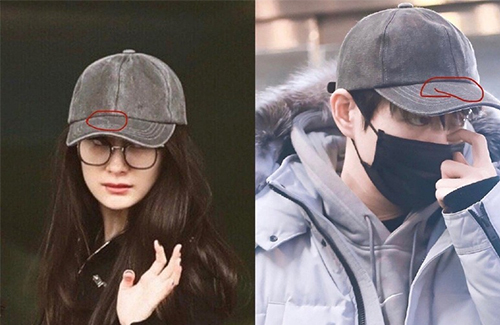 Since her divorce with Hawick Lau (刘恺威) in 2018, Yang Mi (杨幂) has been the subject of a few dating rumors, specifically with fellow actor Wei Daxun (魏大勋). The pair has been spotted going out before, even leaving behind suggestive messages to each other on social media, but when it came to their dating rumor, they neither confirmed nor denied.

Today, a netizen shared a fascinating discovery on Sina Weibo, which further fueled the dating speculations. The netizen went full-on Sherlock Holmes: she pointed out that Yang Mi and Wei Daxun, on two different occasions, was wearing what it appears to be the same baseball cap—the same, because both caps were gray, and both caps contained the same piece of loose thread that was on the same side of the flap.

Yang Mi and Wei Daxun’s dating rumors started to circulate this summer, after the costars worked together for the Chinese variety show Great Escape <密室大逃脱>. Wei Daxun, who debuted in 2008 and an alumnus of the Central Academy of Drama, is three years younger than Yang Mi and is a frequent guest on Happy Camp <快乐大本营> and Who’s the Murderer <明星大偵探>.