Athena Chu’s Dog to Act as Flower Girl at Wedding? 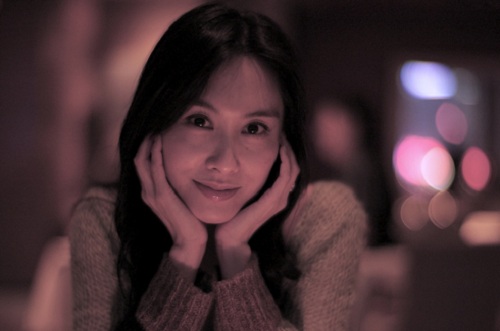 Since Athena Chu (朱茵) announced that she was pregnant in April, she has been busy planning her wedding with boyfriend of 14 years, Paul Wong (黄贯中). The wedding will be held at the end of year. Paul hoped to lavish his bride with a gigantic diamond ring and fantasy wedding, in which the couple’s dogs will be the flower girl and ring-bearer!

After completing his concert at the Hong Kong Coliseum, Beyond band member, Paul Wong hoped to take 1 to 2 months of rest for the upcoming wedding and enjoy his new marriage. Paul said, “This will allow us to take a vacation. It is meaningless to start work right after getting married!”

Paul Eager to Spoil His Bride

As with most engaged couples, 48-year-old Paul Wong and 40-year-old Athena Chu possessed different perspectives on how their wedding celebration should take place. Stating that he wished to work hard and earn more money, Paul desired a grand wedding since it was a once-in-a-lifetime event. Athena preferred to keep the wedding more simple.

The couple has not decided where the wedding reception should take place, whether it should be in Hong Kong or overseas. Athena hinted to friends that she would love to have the wedding celebration at a sunny location near the sea. Paul said that if the wedding were to occur overseas, the expenses would be very high. “If you were to invite guests to your wedding [overseas], it would be rude to expect them to pay [for the travel expenses]!” Since Athena and Paul’s baby will arrive in the late fall, the couple considered to include the baby as a flower girl or ring bearer. However, his friend suggested to plan a fantasy dog wedding instead! Paul said, “Someone suggested that our dogs should be the flower girl and ring bearer. This is a great idea! Athena loves her dog!”

Athena was approximately 5 months pregnant currently, in which she visited the obstetrician once each month. Paul expressed his concern for Athena’s pregnancy, “I told the doctor that I can also examine Athena’s condition as well!”

During Mother’s Day, Paul wrote a Weibo message to Athena, “My dearest love, I represent our baby in wishing you a Happy Mother’s Day for the first time!”

Paul’s excitement for the baby’s birth was infectious. He already envisioned how he would react as an anxious father. “Having a boy, the greatest fear is that he will turn into a girl when he grows up! It would be a bigger problem to have a girl, since I will be a troublesome father-in-law. If a boy calls to ask about homework, I will likely say, ‘If you have any questions, you can ask me,” the soon-to-be groom and father happily joked.

Jayne: Paul Wong sounds like a happy groom and father to-be. He comes across as very loving and protective towards Athena. Wish the couple much happiness!

Since Athena is approximately 5 months pregnant now, she will likely have the baby in late September or October. It appears that the wedding will likely occur at the end of year, after Athena gives birth.

10 comments to Athena Chu’s Dog to Act as Flower Girl at Wedding?