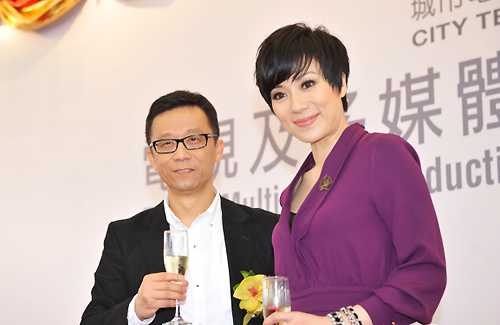 Above: Maggie Cheung had filmed for a CTI drama…will it see the light of the day?

The Hong Kong government is currently is its final stage of review regarding City Telecom’s (CTI) application for a free TV broadcasting license. The government has been pressured by TVB against approving CTI’s license, arguing against its legality and long-term financial viability for the stations. ATV is now stalling for time by accusing CTI’s Ricky Wong (王維基) for theft of ATV’s business documents.

ATV has allegedly filed a police report against Ricky Wong for stealing internal documents prior to his departure as ATV’s CEO two years ago. It was rumored that ATV has videotape evidence of Ricky’s theft.

Ricky dismissed ATV’s accusations as pure nonsense and that there was no videotape evidence in existence. “They are fabricated from nothing!” Ricky challenged ATV to reveal to the public exactly what the missing internal documents are. He also questioned why ATV senior management, since taking over 2 years ago, is only now crying over the “missing” documents after a lengthy lapse in time.

Ricky believed that ATV pressed charges against him for theft in order to stall for time, since the government is in its final stage of review for CTI’s broadcasting license. The government must assure that the licensee is a fit and proper entity. With ATV ready to slander his name, this will result in another delay of 3 to 6 months in governmental investigations in Ricky’s purported theft case.

“ATV has become crazy and utterly incomprehensible,” Ricky described ATV’s desperate attempt to prevent CTI from obtaining its broadcasting license sooner. He pointed out that ATV’s filing of a false police report is a criminal offense.

Although Ricky’s lawyer had issued a letter to ATV asking for an apology due to their slanderous claims, ATV has not yet responded. It is understood that Ricky will now formally file a petition against ATV for slander.

With the pool of advertising revenue in the Hong Kong market limited, TVB and ATV are pulling all stops to prevent another new TV station to enter the market. Will CTI die an early death or will it get its broadcasting license in time before running into cash flow difficulties?