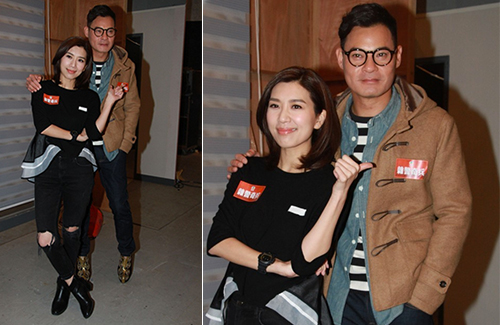 The studio bursted out laughing when Ben Wong showed up wearing a pair of six-inch booties. The lead actor said his character often acts as a model for his designer girlfriend, and had to model heels for her. He hilariously complained about the pain going from his toenails up to his calves, and exclaimed that he can now understand the pain women go through.

Lead actress Mandy plays a pregnant woman throughout the series. She has to wear several layers of clothes to make her big belly look more realistic.

The principal photography for Miscellaneous Cops will last until February. The cast said they look forward to celebrate the holidays with the crew. Mandy expressed that she and Ben will take turns treating the production crew to meals.

Mandy, who turns 34 on Wednesday, will be spending her birthday in the film studios. Having to work everyday, it has been a while since Mandy has last seen her boyfriend, who is not from the entertainment industry. Despite their “long distance”, the couple maintain a close relationship. Asking if her boyfriend has given her anything for her birthday, she said, “That should be automatic!”

Mandy’s frequent costar Benjamin Yuen (袁偉豪), who won Most Popular Male Character for his portrayal as Ngah Lo in A Fist Within Four Walls <城寨英雄>, thanked his ex-girlfriend Jennifer Shum (岑杏賢) during his acceptance speech. Mandy said, “After the awards ceremony, [Benjamin] and I attended a celebratory gathering with the Crazy Runner crew. He looked fine, and was in a good mode. I am an outsider and not suitable to butt in, but they have my blessings.”