Benjamin Yuen (袁偉豪), 38, and Bowie Cheung (張寶兒), 28, have been dating since 2017 when they fell for each other while filming the travel program, All Work No Pay Holidays <打工捱世界Ⅱ>. Despite their 10-year age gap, marriage rumors have been swirling in the air. Last September, they were rumored to be tying the knot this year.

Benjamin reportedly decided to marry Bowie this year after his good friend Joel Chan (陳山聰), who got hitched last November, influenced him to do the same. Also, Benjamin did not deny his mom wants a daughter-in-law

To test out their compatibility as a married couple, Benjamin and Bowie began cohabitating this year. Last week, they went shopping at Francfranc for home goods around 7 p.m. in Causeway Bay. The pair was contemplating on buying a 686 HKD floor mat, but they ended up not buying it in the end. 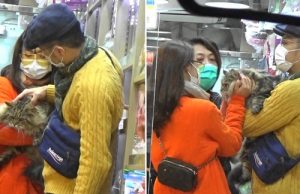 Afterward, they went to a nearby pet store to look at the cats through the display glass. They left after asking for the price and headed to another pet store where they were able to carry an oversized cat. But Bowie wasn’t quite sure how to carry the cat since she is a dog owner.

Last November, Benjamin started raising a cat named Marky. It is said that he wants to find another companion for Marky, so Marky won’t get jealous of Bowie. Also, Benjamin wants to let his girlfriend practice taking care of a small life to prepare for their future as parents. However, the two still left empty-handed from the pet store. 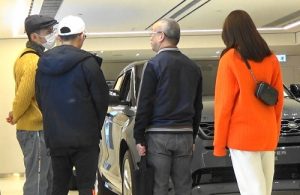 Then, the couple met up with Bowie’s parents and brother at the Jaguar and Land Rover store to look at cars. The three men were checking out an Evoque SUV worth over 800,000 HKD. Benjamin looked comfortable hanging out with the Cheung family and even took them back to the pet store to look at the cats again.