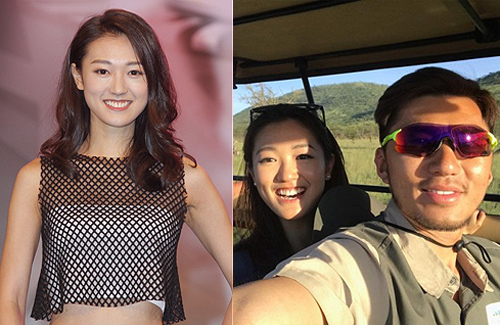 Since breaking up with Jennifer Shum (岑杏賢) last year, Benjamin Yuen (袁偉豪) may finally have a new girlfriend. He is reportedly dating Miss Hong Kong 2016 Bowie Cheung (張寶兒), who won the Miss Friendship award at the pageant.

Prior to being romantically linked to Benjamin, Bowie was in a steady relationship with longtime boyfriend, Jonathan. However, not long after celebrating their seventh dating anniversary together last August, Bowie and Jonathan suddenly called off their relationship.

Returning to work on the reality show All Work No Pay Holiday <打工捱世界Ⅱ> with her new single status, it was rumored that she quickly hit it off with co-star Benjamin. After concluding filming and flying back to Hong Kong, Bowie and Benjamin were caught going on quiet dinner dates. Some keen reporters even caught Ben and Bowie parking their cars next to each other at the TVB studios despite a near-empty parking lot.

Hoping to keep this new budding relationship a secret, it was speculated Benjamin did not want make an official announcement in case the news upset ex-girlfriend, Jennifer. Although Bowie has not confirmed the dating rumors either, the 25-year-old has been glowing ever since filming for All Work No Pay Holiday in Tanzania wrapped up.

Bowie also indirectly dropped hints on her social media accounts of her new relationship. Bowie recently posted a throwback photo of her and Benjamin in Tanzania. On her Instagram photo, she wrote, “Every time I look through the photo album, I miss the days spent in Africa.” As well, Bowie recently changed the cover photo for her Facebook account to a picture of her and Benjamin taken during last year’s Miss Hong Kong competition.