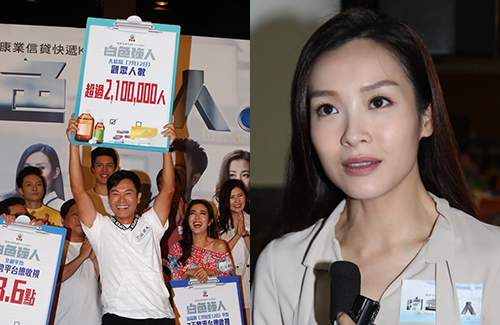 According to official reports, Big White Duel achieved an average of 32.1 viewership points in the last seven days of broadcast, reaching 2.1 million live viewers. Roger said, “It’ll be wonderful if it’s only 0.9 points more. The more the merrier.” In regard to talks that TVB is considering a sequel, he said, “I do hope so, and that it’ll be with the original cast. It’s also important for viewers to maintain that interest too. It’s common for sequels to take several years to make, and to have the viewers regard the show in the same way like what they did years before is difficult. If a sequel does happen, it better happen soon. Hopefully ready for broadcast within a year.”

Though talks for a sequel have been ongoing, Roger said it isn’t very likely at the moment. “I’m not sure if I’ll be free yet, and trying to gather the original cast together is also very difficult. We all have our things to do.”

Roger recently took his 11-year-old son, Brad, to a tour in Europe. He said the trip was meant to be educational, as he wanted his son to learn how other people around the world live. “I was surprised at how much endurance he has. After getting off the train, he walked 15 minutes with his luggage without complaints.” Roger added that he would like to take Brad to colder countries in the future.

Roger would call his wife and daughter every day to keep each other in the loop. “I think the most unforgettable thing that happened in that trip was when we were in Naples. Even locals told us that we shouldn’t carry anything expensive, including a watch. It’s better to not carry anything at all. We didn’t stay there long, so everything was fine.”

Unlike other characters on the show, Dr. Kennis Ching, played by Ali Lee in Big White Duel, had an open ending. Her character was presumably shot while volunteering for Doctors Without Borders overseas, thus her fate is unknown. Ali told reporters that she too had been curious about what happened to her character, and had asked the writers.

“The theme of that scene is to tell viewers that life is impermanent,” said Ali. “I think we can safely assume that she is dead.”

As for talks about a sequel, Ali said, “I don’t know! Maybe it’s because my character is dead. I actually really like her ending. If she does show up in the sequel, that’ll be weird.”

Producer Marco Law (羅永賢) emphasized that he will not make a sequel for the sake of having a sequel. “It was recommended to me, but I won’t start on it until I have a good script,” he said. “If it does happen, I won’t be able to finish it within the year.”