Bobby Au Yeung at “With or Without You” Costume Fitting 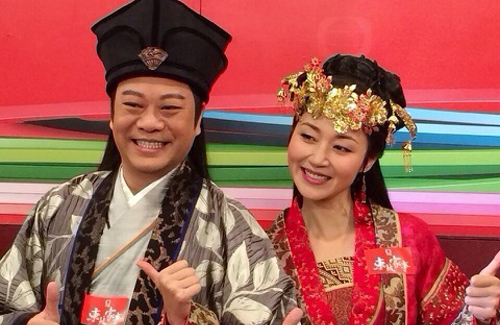 Suffering from acute pneumonia last year, Bobby Au Yeung (歐陽震華) took a long break to regain his  health. Missing from television screens for quite some time, Bobby was excited to film with TVB again in new drama With or Without You <東坡家事>.

Bobby has packed on extra pounds and appeared rounder during the costume-fitting event. Not minding the weight gain, Bobby laughed and said the “fat-boy” look suits his character in With or Without You perfectly.

On good friend Lawrence Ng’s (吳啟華) recent divorce announcement, Bobby commented, “Divorce is very troublesome and I believe that they’ve really thought it through already! Go on vacation to take your mind off things after the divorce; there’s no use in staying at home.”

Also present at the costume fitting, Jacqueline Wong (黃心穎) commented on allegations about her involvement as a third-party in Lawrence’s recent divorce. Claiming that the rumors were fabricated, Jacqueline admitted that she was deeply hurt. Honored to have been given an opportunity to work with Lawrence, Jacqueline will not purposely avoid him in the future and believes that viewers will eventually understand.

Both Alice Chan (陳煒) and Joey Meng (萬綺雯) came from ATV before joining TVB. In their previous days at ATV, Alice and Joey collaborated together in the popular vampire franchise, My Date With A Vampire 3 <我和殭屍有個約會3>. Normally only seeing each other during big group dinners, Alice and Joey expressed their excitement in reuniting on the set of With or Without You after nine years. TAGS: Alice Chan, Bobby Au Yeung, Joey Meng, With or Without You