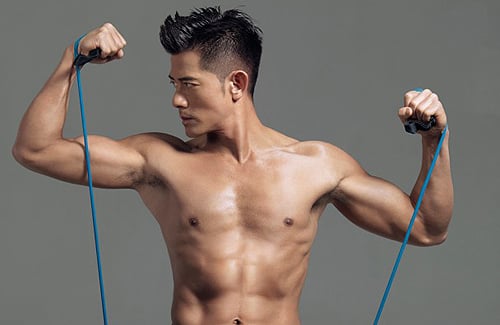 Aaron Kwok (郭富城) has made it his life mission to train and work out his body. The 48-year-old said he began training his body 20 years ago and has not once skipped a day of workout. “I have high expectations of myself,” said Aaron. “I started training 20 years ago and have never slacked off. I will continue to work out in the future. It has become my life’s mission. It is also an interest of mine.”

As an entertainer, Aaron said it is very important to stay in shape and present his best side to the audience. With his goal to consistently stay in shape, it is of no surprise that Aaron has been endorsing the same fitness center for the last 12 years. “To stay in shape is my duty; however, after becoming their endorser, I also have driving force.”

In an earlier interview, Aaron also revealed that he has a habit of waking up at 4 a.m. to go jogging every morning, even when he is in the middle of filming for a movie. He restricts his diet to lean proteins, fruits, and vegetables and only drinks water. Aaron’s rigorous exercise and simple diet over the years have allowed him to achieve great results.

Recently, Aaron filmed an ad for the fitness center, showcasing his lean body and toned arms. The photographer, Wing Shya (夏永康), said the shoot’s purpose was to show off Aaron’s healthy skin tone and body. He said, “Aaron really is the fitness center’s king endorser. Aaron did the photoshoot shirtless and presented his perfect body line and charisma. The photoshoot didn’t take long at all. I am so happy that I was able to capture his confident looks.”