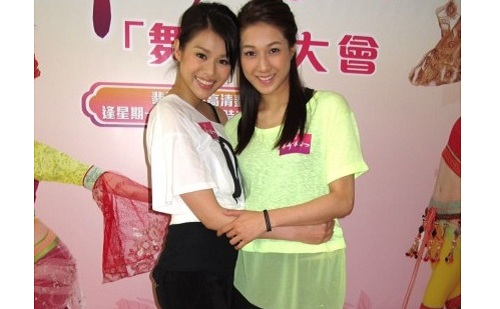 Myolie Wu (胡杏兒) has cemented her status as TVB’s #1 Sister with her rising mainland China presence and income. Arriving at a cast dinner to watch the final episode of House of Harmony and Vengeance <耀舞長安>, Myolie turned heads while driving a $930,000 fire hot Mercedes Benz car. It was even speculated that the car was a gift from Myolie’s boyfriend, Bosco Wong (黃宗澤), to apologize for his wild partying habits!

While Myolie was filming in China in February, Bosco Wong was photographed partying at a nightclub with friends in the Central district of Hong Kong. Inside the club, several women had approached Bosco. He drank to a drunken stupor and his friends had to carry him out of the nightclub.

After Bosco’s partying incident, Myolie teased that she wished him to buy her a new car. The couple was known to lavish expensive gifts upon each other, with Myolie giving Bosco diamond earrings in the past. It appeared that Bosco may have splurged on a new $930,000 HKD Mercedes Benz car to make his girlfriend happy! Myolie was registered as the vehicle owner of the Mercedes Benz car.

A Rare Gathering of Friends

Although Myolie Wu and Linda Chung were love rivals in House of Harmony and Vengeance, they became good friends after filming the TVB series. Myolie said, “We will confide in each other privately. Linda is a very good and pure girl. I hope she will be happy. There is a lot of stress working in the entertainment industry!”

Also complimenting Bobby Au Yeung for maintaining a cheerful filming environment, Myolie hoped to be able to work with the 51-year-old actor again. However, she wished to explore more dramatic roles. “I wish to act in more dramas, since I have filmed too many comedies!”

With more artists leaving TVB to film in mainland China and joining rival station, City Telecom (CTI), the cast of House of Harmony and Vengeance cherished the time spent together. Although Mannor Chan has signed with CTI, she still attended the hot pot dinner. Mannor said, “Although we are no longer colleagues, our friendship will never change! I am 100 percent unwilling to let go! I will cherish my memories of TVB!”

Shifting his career focus to mainland China, Bobby has spent little time in Hong Kong recently.  Asked how he will invest his increasing wealth, Bobby joked, “I give all my money to my wife. It’s okay if she gives me $100 HKD to use!” When teased that he has no money to fool around, Bobby said that he can borrow the money from friends.

Myolie Tipsy After A Few Drinks

Despite staying in mainland China for the past 5 months to film Spicy Mother Smart Father <辣媽俏爸>, she did not miss her Hong Kong friends. Myolie welcomed the freedom that filming in China allowed her. Myolie said, “Not too many people knew who I was while filming there, which gave me a sense of freedom. I was able to live life like a normal person. However, things went back to their usual state upon returning to Hong Kong!”

After drinking several alcoholic drinks at the hot pot gathering, Myolie’s face flushed pink and her steps wobbled. Myolie lingered in saying goodbye to her friends, while hugging Grace Wong. Fortunately, Myolie brought her assistant along to the gathering and exercised proper driving precautions. Myolie’s assistant drove her home afterward.

In the next 6 months, Myolie will be filming TVB dramas, Season of Love <愛的季節>and Triumph in the Skies 2 <衝上雲霄 2>. At the end of the year, she will return to mainland China for new filming projects.

Jayne: I thought that Bosco had admitted to paying the down deposit for Myolie’s new car? But she was responsible for leasing the rest of the payments? They’re a couple who loves spending money on each other!