Bosco Wong Has 9 Properties, But No Love 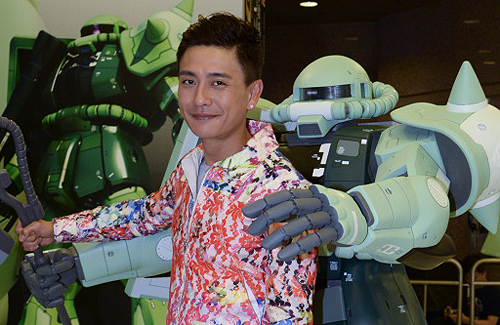 Bosco Wong (黃宗澤) is rich, but has no love? Aside from investing in restaurants and an optical store, Bosco is collecting properties for rental and long-term investment purposes. His nine properties are scattered throughout Hong Kong and Southeast Asia. Although his wealth is impressive, Bosco lamented that he has no girlfriend to love.

Bosco Has No Woman to Love

Bosco and Karena Ng (吳千語) appeared at a Gundam exhibition in Hong Kong today. Although Bosco had purchased a spaceship model for $7,000 HKD in the past, he had better luck in investing in real estate properties rather than collectibles. Setting Simon Yam (任達華) as his model, Bosco hopes to purchase houses throughout the world.

Did his wealth make him a magnet for women? Bosco said, “Do you mean female real estate agents? There is no one to love me. Do you have anyone to introduce to me?” When it was pointed out that Bosco was linked to multiple mainland actresses, he said, “I have houses, but no [women].” Asked if Bosco lacked a female owner to share the house with, he said his mother is a co-owner in all his properties. “It’s easy to ruin me; just find someone to pursue my mother. She is the golden bachelorette; she’s single now!”

Karena Ng Does Not Mind Filming With Raymond Lam Returning from Hengdian after visiting boyfriend Raymond Lam (林峯) on set, Karena Ng appeared at the same promotional event as Bosco today. Although Raymond and Karena were often separated long distance due to work, the couple makes sure to have quality time together and will invite their friends along on their dates.

In the coming months, Karena will be busy filming a Lunar New Year movie and action movie. Despite their love relationship closely followed by the public, Karena does not mind portraying an onscreen couple with Raymond. Karena said, “It’s the director making the casting decisions. As a professional actress, I can work with anyone.”

But the 19-year-old said she will not film any sexy scenes, “It’s not suitable for me to be sexy at my age.”

82 comments to Bosco Wong Has 9 Properties, But No Love