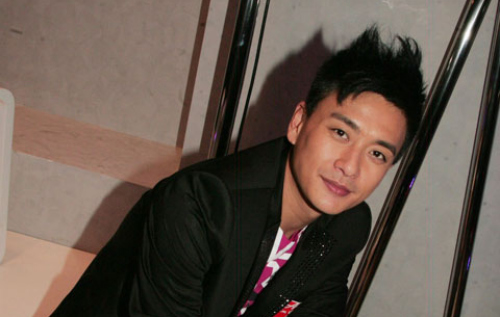 Regarding the poaching wave that has dominated the Hong Kong television industry by storm, Bosco Wong (黃宗澤) professed that it was probably because Ricky Wong (王維基) [chairman of upcoming rival television station, City Telecom] knew that he still had quite a few years before his management contract with TVB officially ended hence there was no invitation call received from the man himself.

Asked whether it might be because he still had to take the trouble to discuss the matter with Myolie Wu (胡杏兒) if he was poached hence the hesitation on Ricky’s part? Bosco replied, “Our work and personal matters take an individual stand. I do have feelings towards TVB. However, it isn’t a bad thing altogether if we have some competition. It is every working adult’s dream to have pay increases and more opportunities. I’m not worried, on my part, about the impact brought to the company from the departure of scriptwriters. This is because I firmly believe that there are pools of talent everywhere.” [Caption: Bosco Wong is a small fan of Coco Lee (李玟) hence he felt very happy about being able to shake hands with his idol]

Lately, there were rumors that TVB felt that Bosco and Laughing-Gor Michael Tse (謝天華) were not enough qualified to win the TV King award and thus had the intention to promote Wayne Lai (黎耀祥) up to win the title once again.

In reply to this, Bosco implied, “I am, of course,  not good enough. In my heart, Wayne Lai is still the person who has the most potential and is worthy of this award. In fact, it would be truly deserving for Wayne to win it.”

Asked whether he was envious of Bowie for being highly sought after by both parties, Bosco laughed and responded, “Bowie is the TV King of Asia [Referring to Bowie Lam’s winning of the “Best Drama Performance By An Actor In A Leading Role” award at the inaugural Asian Television Awards last year for his acting performance in Sisters of Pearl《掌上明珠》]  Thus it is only normal for him to be a hot commodity!” Raymond Wong and Joyce Cheng are happy with the way things are, no intention to dump TVB

When the topic about how the chairman of City Telecom, Ricky Wong, has been launching a poaching operation towards the artistes and employees of TVB of late was brought up, Raymond and Joyce both expressed that they were satisfied with their current state and had not contemplated leaving TVB.

Raymond professed that he did not receive any calls inviting him over to their rival stations and neither did TVB mention anything about holding discussions with him to extend his premature management contract.

Raymond continued, “TVB gave me many opportunities last year. Actually, it is such that one has to invest for quite some time before reaping the results sowed. It is a known fact for everyone that the salary for working in a television station is relatively low. However, it is good in a way that it gives me time to hone my acting skills and helps me to accumulate a faithful bunch of audiences. I’m not anxious to go anywhere else as I’m very satisfied with the current state of things.”

Raymond Wong emphasized that he was not saying this to gain anyone’s favor but it was because he had observed that artistes who weren’t TVB’s “biological” sons and daughters, had received much opportunities from the company too.

In that case, did it mean that artistes would sign on with TVB for the  rest of their life? Raymond responded, “It is up to their own personal choice! If some people were not ideally treated in TVB and other stations were able to give them an even better remuneration package. Then they should, of course, leave. After all, it is only realistic for people to value the monetary aspect in order to earn a living.”

Grew up feeding on TVB’s milk

Although Joyce Cheng only had a singing contract with TVB, she strongly emphasized that she grew up feeding on TVB’s milk hence she is a daughter of TVB. Joyce added, “If it wasn’t for TVB which had approached me to film some dramas back then, I doubt anyone would even have known me.” Louis Yuen admits to having been poached

Although Christine Ng was not present at the event, her absence was fortunately soon replaced by Ava Liu (羽翹).

Louis expressed that the ratings for their variety program were exceptionally good hence the decision to increase five more episodes thus bringing the initial episode count of 13 episodes to 18 episodes.

However, it was known that as Christine was very busy, there will not be a huge chance of adding on further episodes after the stipulated 18 episodes.

It was rumored that TVB has been engulfed by the poaching trend of late. In that case, did Louis receive any invitations to switch stations.

In reply to this, Louis professed, “The rival stations did approach and converse with me. TVB has also started to discuss things with me. Now that there is an open market, there are indeed much more television stations in the industry right now. This also makes the competition for the demand and supply of actors and emcees much more aggressive.”

Louis expressed that he temporarily wouldn’t entertain thoughts of leaving TVB as his management contract with TVB would only expire next year.

Asked whether he had the intention to renew his contract with TVB, Louis responded, “There is a high chance of it as it is better to work at a place that one is familiar with than to work at a totally unfamiliar place.” (Reporter: Did TVB increase your salary in a bid to retain you?) “We are still at the initial stage of negotiating.” Seeing that TVB was currently short-handed, Ava Liu quickly seized the opportunity to sign a management contract with TVB, thus successfully rising through the ranks and becoming a full fledged TVB Artiste.

Appearing at the same event as Louis, it was known that Ava would be filming and hosting a 26 episodes variety program starting from today.

Asked whether she felt it was a great pity that she missed out on the poaching opportunity presented by other television stations, Ava replied that the contractual terms and clauses in the management contract were very reasonable.

Ava also noted that it was most significant to have work opportunities and hoped that she would be able to participate in more event hosting jobs as a emcee.