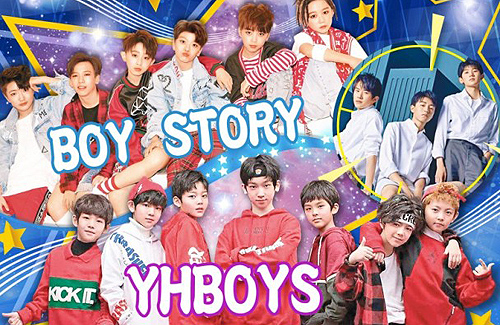 The overwhelming success of TFBOYS has produced a growing number of boybands in Mainland China. The youngest boybands to crop up are BOY STORY and YHBOYS, whose members are on average 12 years old. The new boybands hope to replicate the success of TFBOYS and meet the demands of China’s growing tween market.

With the members of TFBOYS’ Karry Wang (王俊凯), Roy Wang (王源), and Jackson Yee (易烊千玺) turning 18 years old this year, the boys are already pursuing more mature music styles and released their own solo singles. Karry, Roy, and Jackson have also ventured into acting in dramas to broaden their entertainment careers.

Training one year in South Korea, the members of BOY STORY all have strong dancing and rapping skills. The style of their music videos are fused with heavy K-pop influences. BOY STORY is currently led by 13-year-old Hanyu, and the youngest is 10-year-old Shuyang. Xinlong, Zeyu, Zihao, and Mingrui are the other members.

The release of singles, “How Old R U” and “Can’t Stop”, have helped BOY STORY gain fans across Asia. Fans are stunned by BOY STORY’s performance abilities and believe they are one of the most promising young boybands to emerge.

YHBOYS has succeeded by following TFBOYS’ music style. YHBOYS’ member, Zhang Minghao (張銘浩), is even noted to resemble Roy Wang. They gained the support of Fan Bingbing (范冰冰) and Han Geng (韓庚), which helped boost their recognition levels outside of China.

YHBOYS were asked to sing the promotional song for the Mainland Chinese release of Transformers: The Last Knight. As the only Chinese popstars to attend the 2017 Billboard Music Awards in Las Vegas, YHBOYS made their fans proud.

The seven members of YHBOYS have a promising future. When they are not studying for school, they are busy practicing their singing and dance routines. The excited boys believe that they will even outdo TFBOYS!