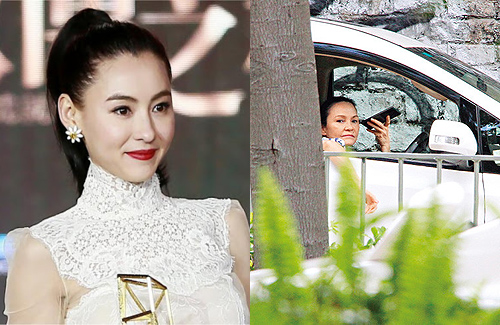 Cecilia’s mom has been driving a seven-seater luxurious model for close to three years.

Divorced from Nicholas Tse (謝霆鋒) for nine years, Cecilia Chung (張栢芝) secretly gave birth to her third child nicknamed “Little Prince” last year, while taking on immense pressure as a single mother. Rumors swirled that the 40-year-old, who has been financially supporting her parents and half siblings all along, has since stopped providing for them. Cecilia’s 59-year-old mother, Davies Shally (戴莎妮) still has to work to make a living and has taken on a job as an Uber driver.

In stark contrast, their former in-law, Nicholas’ mother Deborah Lee (狄波拉), continues to enjoy her extravagant retiree lifestyle. A few days ago, both the former in-laws were spotted at Central district in Hong Kong, where Deborah shopped at high-end stores before taking her lunch at a lavish western restaurant.

As for Davies, she was seen waiting for potential customers behind the wheel of her car outside a mall. Looking gloomy from the lack of business, she was spotted airing her grievances on her mobile phone and sighing periodically during her fruitless wait.

A filial daughter, Cecilia had supported her parents and siblings without complaints since joining the entertainment industry at a young age. Switching to the Chinese market since she divorced from Nicholas in 2011, she was the primary caregiver for their sons Lucas (謝振軒) and Quintus (謝振南). Adding to that the birth of her son Marcus (張禮承) last year, her financial pressures further intensified.

A few years ago, Cecilia shared publicly about her financial struggles on social media, and news of her halting support for her parents surfaced. Her mother Davies was forced to go back to work, including taking on director Edmund Poon’s (潘紹聰) R-rated horror film The Cases II <魕異>, working as a sales assistant at a Kowloon bakery, and most recently as an Uber driver.

Almost three years into the job, Cecilia’s mother has since garnered rave online reviews from her passengers, earning an impressive rating of 4.7 out of 5 from nearly 2,000 transactions. They left comments complimenting her professional attitude, as seen from her formal attire, friendly smiles and thoughtful service.

Unlike her previous professional wear, however, Davies was dressed casually when spotted in her car stationed outside the mall the other day. Due to the COVID-19 pandemic, business has slowed down and she did not receive even a single passenger in one hour or of waiting.