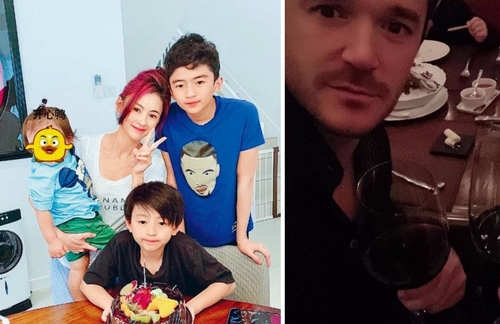 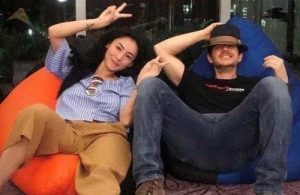 The identity of Marcus Cheung‘s (張禮承) father remained largely a mystery ever since Cecilia Cheung (張栢芝) gave birth to the child in 2018. When news broke that Cecilia, who was not known to be dating anyone at the time, welcomed her third son into the world, the media dug deep for the baby daddy’s identity. Reporters discovered several men in Cecilia’s life who could potentially be Marcus’ father, including her English teacher Leo, who is a British engineer working in Singapore. Although the 39-year-old celebrity refuted the rumors then, reporters are even more convinced that Leo is the missing piece to the puzzle now.

Earlier this week, Cecilia took a photo with her three sons in celebration of her middle child, Quintus Tse‘s (谢振南) birthday. Though her first two sons, whom she had with her ex-husband, Nicholas Tse (謝霆鋒), could be seen clearly in the photo, Marcus’ face was covered with a duck sticker for privacy reasons. However, Cecilia did not cover Marcus’ hair, and many people noticed that his hair is blond.

This sparked the idea that his father is Caucasian – and possibly Leo. It won’t be surprising given that Leo was also in attendance at Marcus’ first birthday. Although Cecilia and Leo have clarified that they are only friends, many believe otherwise.

British Engineer is the Father of Cecilia Cheung’s Baby?