Fans are excited about Cecilia working with Ni Ni.

The producer of the dramatic remake of the 1988 film hit Last Romance <流金歲月> has been revealed to be New Classic Media, which helmed many popular productions including Joy of Life <慶餘年>, Ruyi’s Royal Love in the Palace <如懿傳> and The First Half of My Life <我的前半生>.

There has been talk of the star-studded cast lineup: female leads have been revealed to be Ni Ni (倪妮) who will play Zhu Suo Suo, Cecilia Liu (劉詩詩) as Jiang Nan Sun, Faye Yu (俞飛鴻) as Jiang’s aunt while the male cast includes Chen Daoming (陳道明), as well as Tony Yang (楊祐寧), Eric Le Yang (楊玏) and Tian Yu (田雨). The new drama adaptation will allegedly start in April.

The original novel is by Hong Kong author Yi Shu (亦舒) and is centered around two friends, Zhu Suo Suo and Jiang Nan Sun. The two intelligent and beautiful girls, with vastly different family backgrounds and personalities, strike up a close friendship after the latter’s family takes the less well-to-do Suo Suo in and aids her through tough times. After entering society, Suo Suo goes through the rites of passage at the workplace while Nan Sun continues pursuing her studies, but the two would help and support each other through life’s hurdles, each achieving respective successes.

As early as December 2017, the Chinese drama adaptation had been confirmed and slated for production with filming due to start in October 2018, which was eventually adjourned till now. The original cast of choice for the two leading actresses were Betty Sun (孫儷) and Ni Ni, but the former had turned down the series.

Besides the two leads, veteran actress Faye Yu is also a popular choice for her role. Rising in popularity for her role in ‘Jing Hong Xian Zi’ Yang Yan in The Little Li Flying Dagger <小李飛刀>, she has taken part in many big-budget dramas and film productions, winning many over with her elegant aura and independent personality. 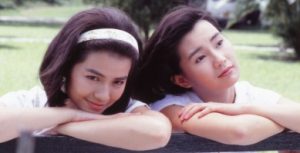 Netizens are very excited over the cast lineup, especially the onscreen sparks to be expected between Ni Ni and Cecilia Liu. However, as a television adaptation of the classic 1988 film starring Cherie Chung (钟楚红) and Maggie Cheung (张曼玉), big expectations will pose a challenge for Cecilia and Ni Ni.

While fans have expressed they will trust only the official confirmation of the cast, some netizens have spilled that Ni Ni has already been confirmed while Cecilia’s involvement is still in discussion.