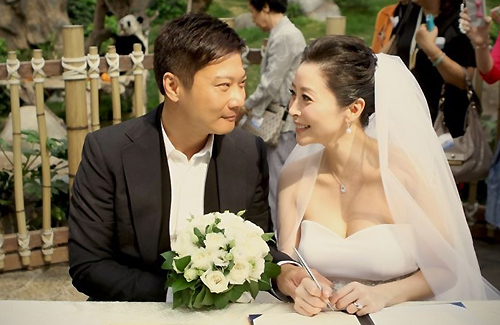 Angela Tong (湯盈盈) and Chin Kar Lok (錢嘉樂) finally tied the knot on Tuesday, November 13, 2012, after five years of dating. With pandas as their witnesses, Angela and Kar Lok wed in Ocean Park’s Panda Gallery in Hong Kong. Attended by over fifty family members and friends, Angela and Kar Lok’s unique panda wedding ceremony may not be as lavish or extravagant as other celebrity weddings, but it is truly one wedding to never forget.

Angela and Kar Lok is the first Hong Kong couple to wed in Panda Gallery, and Hong Kong’s treasured panda couple, Lok Lok and Ying Ying, is also acting as witnesses for the first time. Although flash photography and shouting are not allowed in the gallery, the romantic and heartwarming atmosphere is clearly felt through the happy couple and their friends and families.  Kar Lok later remarked after the ceremony, “(The panda) Ying Ying was very nice, but she did nothing else but eat!”

Chin Kar Lok is known for his joking behavior and laid back personality, and never did the groom look more serious when he recited his wedding vows. Kar Lok stated, “From now on, I will live my life with my companion, and I will hold onto you forever.” When Kar Lok referred to Angela’s parents as mother and father, Angela broke into tears.

After the wedding ceremony ended, the new couple received press interviews at the panda restaurant. Upon the reporters’ request, Angela showed off her 2 carat engagement ring and her rubble wedding ring, revealing that the two rings cost a six-figure sum. Kar Lok laughed, “Those rings were very expensive. Now I have to make more films to compensate the loss!”

Angela is currently several months pregnant. Kar Lok expressed, “This baby has really brought me luck. Recently, I have received several film nominations, a car racing cup, and won two business class tickets in a game! We will have our honeymoon after the baby is born!”

The couple refused to reveal the baby’s sex at the moment to create anticipation for the games that will be held at their wedding banquet. Whoever guesses the correct sex of the baby will be gifted two round trip business-class flight tickets to Thailand.

When asked for the baby’s name, Kar Lok laughed, “I want to name it Chin Jun Jun (Money Come Come)!”

When will the baby be born? Kar Lok said, “Timmy Hung (洪天明) and Janet Chow’s (周家蔚) baby is expected to arrive in January. Angela’s will arrive in March. It would be best if both of them were at around the same time!”