The actress ended up hiring a home tuition teacher for their daughters.

Owing to the coronavirus outbreak, schools in Hong Kong have suspended classes until mid-March. Mother of two, actress Angela Tong (湯盈盈), shared that staying home to coach her daughters schoolwork has affected their relationship negatively, while husband Chin Ka Lok (錢嘉樂) made things worse by using his shortcut method to teach them Chinese. 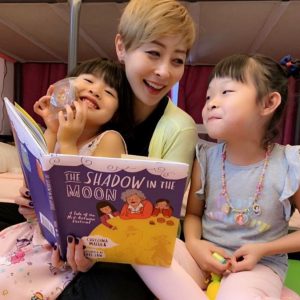 With schools assigning homework to students online, Angela started coaching her two daughters, Alyssa aged six and Kassidy aged four respectively. However, she admitted having lost patience and flaring up on a few occasions, describing herself as being like a “fire-spewing dragon”. The actress realized her problem when her daughters started distancing themselves from her and their expressions of love towards her changed from “I love you, Mommy” to “I love you Mommy, sometimes”.

As Angela was born and bred in Montreal, Canada, she had limited proficiency in Mandarin and hence passed the task of coaching their daughters on Chinese school assignments to husband Ka Lok. However, Angela’s suspicions arose when her husband and daughters would quickly finish the homework very quickly each time. Under questioning, she realized that Ka Lok would get Alyssa and Kassidy to copy the correct answers provided by himself, which infuriated her.

She reproached her husband and hired a home tutor instead. To mend her relationship with her two daughters, Angela has also explained and apologized to them, hoping the two would understand Mommy’s pains.

With both Alyssa and Kassidy studying at international schools, their main language of communication is English. Angela had earlier shared that the two girls can understand Mandarin but not speak it well, hence she hoped her husband would coach and help them improve their Chinese. However, Ka Lok ended up being “taught” putonghua by their daughters instead, with Angela herself also picking up bits of Mandarin from them.

Growing up in Montreal, Canada, Angela had won the 1994 Miss Montreal pageant and entered the entertainment industry after taking part in Hong Kong’s Miss Chinese International pageant the following year. Besides being fluent in English, she also knows French, the second language in Canada. It appears that Angela’s daughters may have inherited their mother’s linguistic gifts!