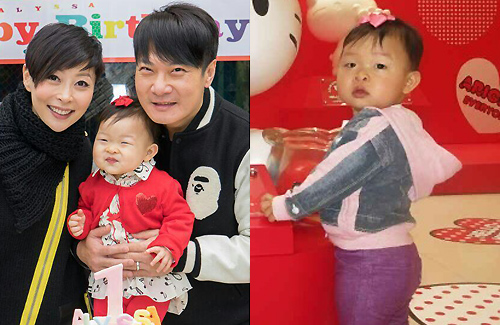 Since giving birth in March, Angela often accepts interviews with Alyssa by her side. Recently, a family photo of the Chin family was uploaded onto a website, causing many netizens to laugh and comment rudely that Alyssa looked more like a boy.

One netizen wrote, “To be honest, [the baby] is super ugly!” While another commented, “If the mother were Lee San San (李珊珊), would the baby be prettier?”

Having read the offensive remarks, Angela reportedly cried from being angry and upset. In response the netizen’s mean posts, Chin Ka Lok bitterly joked that they will have a son next time. Ka Lok also urged Angela to disregard the comments as long as their daughter is healthy.

Before the posts about Alyssa’s boyish looks rolled in, Eric Tsang (曾志偉) previously teased Alyssa. Eric said, “It’s a tragedy for her to look like her father!” At that time, Chin Ka Lok only took it as a joke and responded, “The super trio master (Eric) said that my daughter looking like her father is a tragedy, but I said that she’s very beautiful. It doesn’t matter who she resembles. To me, it’s more like a comedy. She looks like Yuen Biao (元彪) and Meng Hai (孟海) right now, but she’ll grow up to be pretty.”

Chin Ka Lok revealed that the couple has plans for a second child, and stated that Angela has begun exercising to maintain her health. Good friends, Janet Chow (周家蔚) and Annie Man (文頌嫻) will also try to have their second babies at the same time. Angela likes to exchange parenting tips with Janet and Annie when they meet up.

Nearly 40 years old, Angela decided to minimize her workload in order to rest and prepare for a second pregnancy. Angela also began seeing traditional Chinese herbalist, Chiu Siu Ping (趙少萍), so she can stay in good health. Known to providing medicine to guarantee having a son, actresses such as Kelly Chen (陳慧琳) and Janet Chow have been her customers.