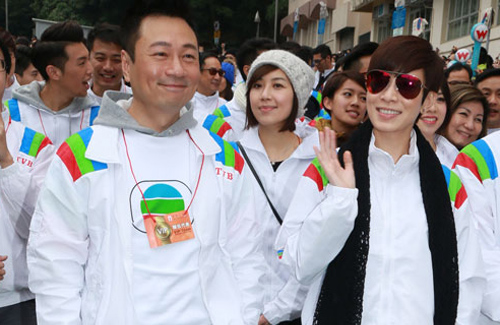 Kevin Cheng (鄭嘉穎) and Charmaine Sheh (佘詩曼) reportedly dated while shooting Forensic Heroes 2 <法證先鋒II> in 2008, and later admitted that they had good feelings for each other. Although they currently insist they are only friends, reconciliation rumors still swirl for the onscreen couple.

On New Year’s Eve, Kevin was spotted kissing a pretty, long-haired woman at a nightclub in Hong Kong. A tabloid magazine published the photos earlier this week. Charmaine, who participated in the Walk for Millions event today, was asked to comment on Kevin’s behavior at the nightclub.

Charmaine said she has not read the reports. Asked if Kevin would always take the initiative to approach girls he admired, Charmaine said, “You have to ask him that. Why are you asking me? [Was Kevin the one who asked you out first?] I don’t know.”

The actress continued to respond nonchalantly concerning Kevin and their dating rumors. Regarding the rumors that Kevin pursued Charmaine again after breaking up, she said, “I never said that. It was all talk from [the tabloids].”

She expressed that she hopes Kevin finds happiness. “It’s good to know that he’s happy. That is all that matters.” Is Charmaine happy? She smiled and said, “I’m living a happy life now. Thank you for everyone’s concern.”