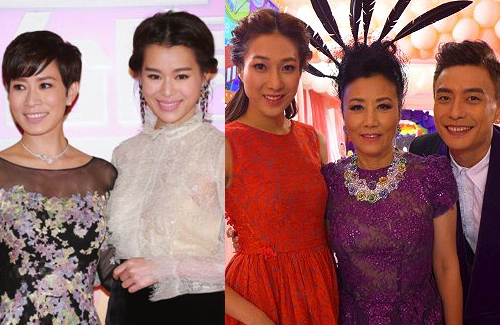 Due to her recent popularity, Charmaine Sheh was featured in a drama skit crossover between Line Walker <使徒行者> and Tiger Cubs 2 <飛虎II>. Nat Chan (陳百祥) drove a car onto the stage and joined Charmaine, Sharon Chan (陳敏之), Sammy Sum (沈震軒). When it was pointed out that TVB appears to highly value her position within the company, Charmaine said, “I’m grateful for TVB’s arrangement!” but stated that many artistes shone in their respective performances.

The cast of Come On, Cousin <老表，你好hea!> performed a dance segment, in which onscreen couple Bob Lam (林盛斌) and May Chan (陳嘉佳) had close bodily contact. Suspended by wires, Bob inverted himself while balancing on May’s face.

The most memorable moment of the evening occurred when Wong Cho Lam, joined by the Come On, Cousin cast, knelt on stage and proposed to girlfriend Leanne Li. Taken completely by surprise, Leanne was speechless but happily accepted the proposal. “I’m getting married!” Cho Lam shouted victoriously.

Edwin Siu’s Turn to Propose Next?

Wayne Lai (黎耀祥) expressed his congratulations to Cho Lam and Leanne, but said he personally lacked the courage for such a public marriage proposal. Raymond Cho (曹永廉) said, “Let’s see if Edwin Siu (蕭正楠) will have this courage [to propose to Priscilla Wong (黃翠如)]!” Wayne replied, “No problem, let’s help him out at next year’s [Anniversary]!”

Eric Tsang (曾志偉) led the M-Club ladies of Never Dance Alone <女人俱樂部> in their hula-hooping talents, and later joined Nat Chan in giving out prizes all night. Over $3.8 million HKD worth of prizes were given away to lucky artistes during the games segment, with recently married Lai Lok Yi (黎諾懿) winning $1 million HKD.

Kenneth Ma and Moses Chan provoked laughter when they attempted to ride children’s tricycles, which left their long legs dangling off the pedals. Speaking with the press after the festivities, Kenneth was asked about ex-girlfriend Nancy Wu‘s (胡定欣) recent breakup with her marketing executive boyfriend. Will he take the opportunity to pursue Nancy again? Kenneth said, “There is more to life than just love relationships. I don’t focus only on love. I can’t pursue her again just because she broke up. I think about playing soccer more than women! It’s best that we remain friends!”

Another ex-couple, Myolie Wu and Bosco Wong, were arranged to appear in different parts of the program. Myolie said she was not embarrassed to attend the same event as Bosco. Responding to questions over her soon-to-expire TVB contract, Myolie said, “TVB gave me many choices. We’re still discussing the details. There is still time left before my contract expires.”

Bosco was asked if he had tried to persuade Myolie in staying with TVB. “This is the job of TVB executives; I don’t have any powers of persuasion!” Although absent from Hong Kong recently due to his filming commitments in Mainland China, Bosco promised that he will attend the upcoming TVB Anniversary Awards ceremony.