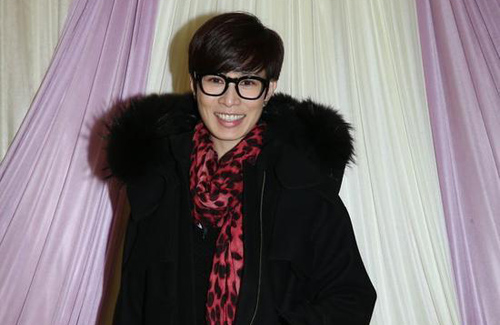 Line Walker <使徒行者> was the biggest winner at TVB’s Anniversary Awards this year, bringing home four major awards including Best Drama, Best Actress and My Favorite Female Character for Charmaine Sheh (佘詩曼), and My Favorite Male Character for Benz Hui (許紹雄). The cast and crew met for an eight-table celebration banquet, which was held at a hotel in Tsim Sha Tsui today.

The banquet was also regarded as belated Christmas party for the crew. Due to schedule conflicts, Benz Hui was not present at the dinner.

As this year’s TV Queen, Charmaine treated for dinner and said she does not mind spending more money for parties as it is finally Christmas time and the winter holidays. However, the actress shared that she may be resting at home for Christmas Eve, expressing that she has caught a cold.

Recently, there have been reports claiming Charmaine’s rumored boyfriend, Kevin Cheng (鄭嘉穎), has a new girlfriend in Shanghai. Asked for her opinion on the matter, Charmaine responded simply, “No comment. Merry Christmas!”