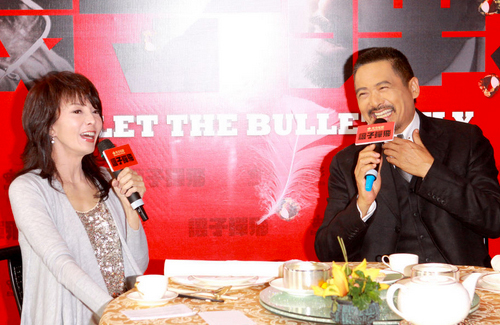 After over forty years in showbiz, Chow Yun-fat (周潤發) said he still considers Carol Cheng (鄭裕玲) to be the best partner he’s had as an actor.

This week, Chow Yun-fat (Fat Gor) flew to Beijing to promote the film From Vegas to Macau III <賭城風雲III>, which opens in Chinese cinemas on February 8, Lunar New Year. In an interview, the 60-year-old veteran actor reflected on his 40-year acting career, expressing that every project he has been part of was unforgettable.

“It’s really hard to find a representative work out of my representative work,” he joked. Nonetheless, the humble superstar added that he’s happy to have been able to work with so many different directors and movie stars over the years.

When asked about which star he enjoyed working with the most, Fat Gor said, “The filming duration for movies is rather short—only about two to three months—but Hard Boiled <辣手神探> did take half a year to shoot because it had a lot of action scenes. However, when it comes to television, the shooting period for a drama is much longer, and you can spend half a year with one person. [For me] that person was definitely DoDo [Carol Cheng].”

Back in the late 70’s, Fat Gor and DoDo filmed two dramas together in a row—The Good, the Bad, and the Ugly <網中人>, and The Brothers <親情>. Their strong chemistry on screen left a deep impression on many viewers, and were dubbed “the golden couple” by the industry. Fat Gor and DoDo went on to play a couple in two commercially-successful films as well.

Fat Gor said, “I saw her more than I saw my mom! Both dramas involved families, and she played my girlfriend in both. We spent a lot of time together. Although I can’t say I know her well, I got really invested in our onscreen relationship, so I really did fall in love with her at the time. I extremely admire her.”

Fat Gor and DoDo seldom contacted after Fat Gor left TVB. They met each other again in 2010, when DoDo hosted a press conference for Fat Gor’s film Let the Bullets Fly <讓子彈飛>. The two hugged and chatted like old friends.

Asking if there would be an opportunity for the golden duo to work together again, Fat Gor said with a laugh, “She has already found her true love. She found Dayo Wong (黃子華)! She doesn’t need me anymore!”

2 comments to Chow Yun-fat: “Carol Cheng Was My Best Partner”