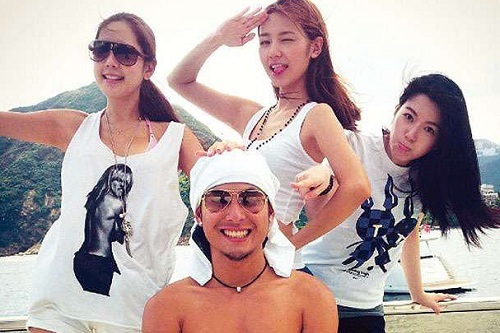 Due to Boscolie’s high-profile breakup last week, 2005 Miss Chinese Toronto winner, Elva Ni’s old romantic rumors with Bosco were recycled in tabloid headlines. Stepping forward to clarify that she was never involved with Bosco, Elva instead had a steady boyfriend in the wealthy EEG heir, Alex Yeung.

After completing her studies in Toronto, Elva returned to Hong Kong and signed with Universe Entertainment Ltd last year. In November, Elva was spotted on a date with Alex. Although she denied that she was romantically involved wiht Alex Yeung, it was a known secret among their friends that they were a couple.

Mixing With the Wealthy Second Generation

At the height of summer season, Alex Yeung threw parties aboard his private yacht over the last 2 weeks, inviting almost two dozen of his friends to join. Photos of Alex’s yacht parties circulated online recently. Among the party goers, there were few men, while there was an abundance of pretty girls.

Elva attended the yacht parties over the last 2 weeks, while bringing along good friends, Christine Kuo, and Korean model, Enjel Choi (蔡恩真). While most of the girls wore skimpy tank tops and shorts, Christine interestingly covered herself from head-to-toe in a t-shirt and long pants.

Since both 25-year-old Elva and 29-year-old Christine were former winners of the Miss Chinese Toronto Pageant, the women got along extremely well. Since breaking up with her godmother’s son and former Mr. Hong Kong participant, Joey Law ( 羅天宇), Christine has been heavily promoted by TVB.

Branded as a “goddess” among many men due to her beautiful features and curvaeous figure, Christine took on prominent roles in currently aired dramas, Flying Tigers <飛虎> and Ghetto Justice 2 <怒火街頭 2>. Apparently, Christine was also very popular among the wealthy-second-generation bachelors as well!