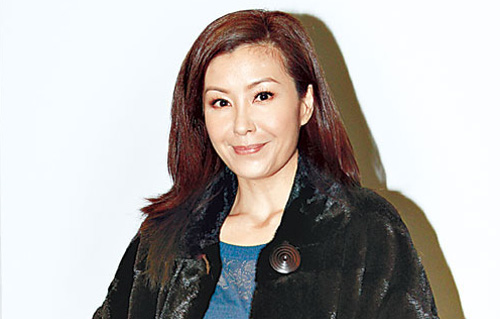 Sheren Tang (鄧萃雯) and Christine Ng (伍詠薇) had a private costume fitting for TVB drama, War and Beauty 2 <金枝慾孽2>. Early in the morning, Sheren tried on her hairpiece and costume. Upon spotting reporters, Sheren covered her face and rushed off quickly. The staff immediately closed the doors and even taped the glass windows to prevent the exposure of the costumes for the time being.

Christine Ng arrived at TVB City during noon time, revealing that she will portray Sheren’s younger sister in War and Beauty 2. Asked whether Christine will be portraying an Empress in the drama, Christine smiled and could not conceal her excitement. Asked whether she will be filming any ambiguous love scenes [lesbian scenarios], Christine noted that the script was not available yet. “If [lesbian relationships] occurred during that historical period, I would like to portray it too. I am a bold actress. I told Producer Jonathan Chik (戚其義) that he can stretch his wild imagination, hoping that he will take advantage of me!”

Jayne: Seems as if TVB’s heavyweight dramas, such as War and Beauty 2, Triumph in the Skies 2, etc. had many casting issues, where they had trouble shifting people around. The official costume fitting for War and Beauty 2 should start soon.