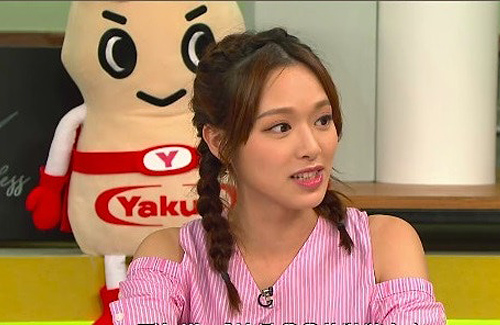 Living with her boyfriend, Crystal is tired out by never-ending housework every day!

In the latest marriage-themed episode of talk show program Young and Restless <後生仔傾吓偈>, guest star Stephanie Ho (何雁詩) shared that she got proposed to when she was just five years old – by a boy who shared the same birthday as her. She had even accepted a ring from him then. When her current boyfriend Fred Cheng (鄭俊弘) apparently felt threatened by this revelation, Stephanie set his mind at ease by telling him “We’re not in touch anymore.” She also spilled on the show that her relationship with Fred is very strong.

Asked by host Louisa Mak (麥明詩) if there will be wedding bells soon, the 26-year-old actress replied that she had said the same words to both Fred and the boy then: “Anytime is good.”

Delving into the topic of fear of marriage, the group suggested that cohabitation would lead to the discovery of your partner’s flaws better – something which Crystal Fung (馮盈盈) couldn’t agree more with. The TVB actress’ father had always advised her to try living together with her partner instead of merely enjoying the dating process. Moving in with her doctor boyfriend Martin recently, Crystal said, “I really feel like calling my mom up, I didn’t known that housework is so tough! I had my mom and a helper at home then, but now I have to do my own housework. It’s a vicious circle that never ends!”

Hearing Crystal’s gripes, Louisa chimed in, “She spends so much time on housework that she doesn’t have time for other things.” Crystal added that she mistakenly thought living together would mean more cozy couple time, but in the end it was all about endless cycle of washing clothes and vacuuming. “I’d get so tired. I want to chat when I get into bed, but [Martin] was already asleep.”