Crystal Liu is Rumored to Be Pregnant 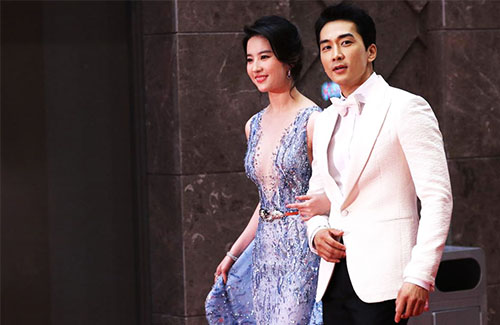 Korean sources are speculating that Crystal Liu Yifei (刘亦菲), who has been dating Korean actor Song Seung-heon (宋承憲) since 2015, is pregnant. According to the rumor, Crystal and Seung-heon have entered the “stable” stage of their relationship. Seung-heon went on vacation with Crystal and her mother last year, and has even proposed to Crystal in a private setting.

The source said rumors of Crystal’s pregnancy first circulated in Hong Kong. Paparazzi photos of Crystal has the actress looking more bloated than usual, carrying much of that pregnancy glow. The 29-year-old has also been dressing differently, which fueled the pregnancy rumor some more. It appears highly likely that the couple are planning to get married very soon.

Crystal and Seung-heon haven’t responded to these rumors.

The couple first met on the set of the film The Third Way of Love <第三种爱情>, released in 2015. Playing lovers, sparks quickly flew between the pair. They confirmed their relationship after Chinese paparazzi released photos of them meeting up privately.

Last year, there were rumors that the couple have broken up, but they were “not concerned” of the reports. They have since showed support for each other on social media.

4 comments to Crystal Liu is Rumored to Be Pregnant