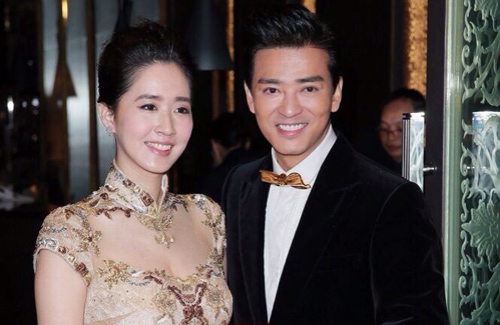 Daniel Chan (陳曉東) has finally settled down. The 38-year-old held a private wedding banquet in Hong Kong on February 12 to celebrate his marriage to girlfriend, 26-year-old Wang Yuxian (王妤嫻). Daniel also confirmed earlier reports that his girlfriend is pregnant, though insisted that it was simply a happy coincidence.

After his very public break up with Cecilia Cheung (張栢芝) more than a decade ago, Daniel has dated several rising starlets but none of these relationships lasted. Working mostly in Mainland and Taiwan in recent years, he gave his heart to Mainland actress Pei Wei Ying (裴唯瑩) in 2006 but the pair split shortly after. He later dated model Dan Dan (丹丹) and the two had plans to marry in 2010 but fate was not on their side. He was then rumored with Taiwanese model Mandy Wei (魏蔓), though that romance also did not last.

In early 2013, he participated in the filming of Taiwanese idol drama Love SOS <愛情急整室>, playing the director of a cosmetic surgery clinic. While on location, he met local nurse Wang Yu Xian and quickly developed romantic sparks. At the end of January 2014, local media began reporting on a possible wedding, and some said that Yuxian was two months pregnant. Earlier this week, the couple brought their families on a Dubai trip during Lunar New Year to discuss wedding details.

Although the couple wished to keep their banquet private, the press showed up outside of the venue. Dressed entirely in gold, the bashful bride faced the press for the very first time as Daniel discussed their big day in Cantonese. He explained that they have yet to register for their marriage, though there are plans to hold multiple celebrations in Hong Kong, Taiwan, and China to celebrate with all of their friends and families.

When confronted about the pregnancy rumors, Daniel admits that Yuxian is currently four months pregnant but clarified that it was not the reason behind their quick marriage. “We already had plans to get married. When I began to discuss the matter with her, she said, ‘I think I may be pregnant.'” Although still too early to tell, the doctor has predicted that they are likely expecting a girl. Daniel is happy regardless of the gender of the baby and is already thinking about having more.

Trusting his wife’s instincts, Daniel agrees to birth the child in Yuxian’s home country Taiwan. “She comes from a family of Chinese medicine practitioners and is also a nurse herself, so I am not too worried….” Always wanting a family of his own, he feels that now is the right time to start and is grateful to take the journey with a wonderful woman. “I will be 70 years old when my children are grown, but my wife is much younger and will face heavy pressure for being with me. I hope we will have time to adjust [to our new lives].”