Despite Romantic Rumors, Tavia Yeung and Him Law Continue to Praise Each Other 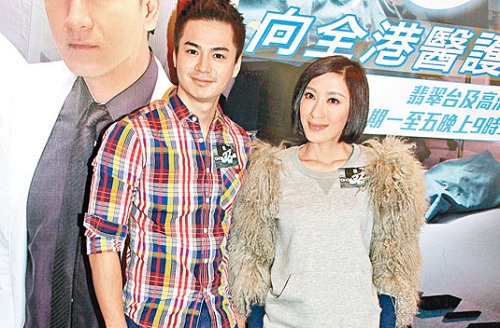 Currently aired TVB drama, The Hippocratic Crush < On Call 36小時>, continued to experience favorable ratings. Last week, the drama averaged 30 points and peaked at 33 points. Despite the series centralizing on doctors, The Hippocratic Crush bore similarities to past TVB medical dramas, which focused heavily on romantic and family relationships, in which Kenneth Ma (馬國明) and Him Law (羅仲謙) fought for the affections of Tavia Yeung (楊怡).  However, the onscreen romantic arcs in The Hippocratic Crush may be more easily predicted than Tavia’s love life in real life!

As reported by the Oriental Daily, Kenneth stated that he was aware of the online community’s support for his relationship with Tavia in the drama, “The later episodes will concentrate more on our romance. At that point, I will be able to win Tavia from Him Law’s grasp!”  Kenneth also claimed that he was unaware whether Tavia and Him were a real life couple or not, as there was no observed evidence.

Promoting The Hippocratic Crush yesterday, Tavia Yeung and Him Law did not appear embarrassed despite romantic rumors. Tavia even suggested that vendors solicit them for promotional activities. Tavia noted, “If a barbeque restaurant were to invite us to their ribbon cutting ceremony, we can negotiate the price!” Tavia’s statement referenced her outing last Halloween with Him, in which the pair was photographed intimately in conversation at a barbeque with friends.  Asked whether her rumored romance with Him had boosted the ratings of The Hippocratic Crush, Tavia replied, “I have always been a solid actress.” Him chipped in, “I have to learn from Tavia; she is a talented idol and beautiful girl!” Tavia returned Him’s compliment and praised him as good looking as well.

When it was suggested that Him should sign with TVB to increase his collaborative opportunities with Tavia, she joked, “If I were his manager, I would suggest Him to do so!” Him joked that he would have poor returns if Tavia were to take commissions from his salary.

Despite the pair’s bantering, it was evident that Him’s popularity rose quickly after the broadcast of The Hippocratic Crush. Him’s character was received favorably and the actor was addressed by his character’s name by pedestrians when he stepped out on the streets.

Jayne: How many people are watching this drama because of Him Law’s rumors with Tavia?

110 comments to Despite Romantic Rumors, Tavia Yeung and Him Law Continue to Praise Each Other