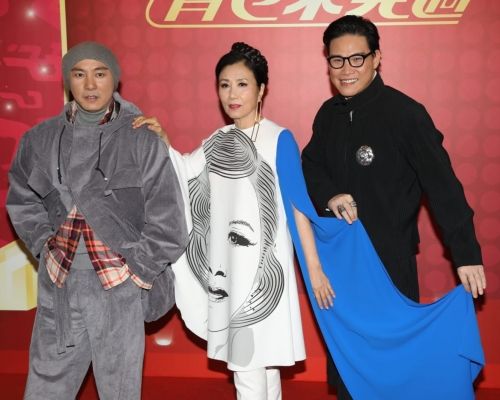 On December 18, Dicky Cheung (張衛健) made an appearance at TVB City to record Liza Wang’s (汪明荃) new show, What Doesn’t Liza Know? <阿姐有乜未見過>. The actor specially attended to congratulate Liza, especially after good friend and co-host of the show, William So (蘇永康), “forced” him to free up his schedule to attend. Reporters took the opportunity to question Dicky’s absence at the TVB Anniversary Awards on the 16th.

“It doesn’t matter!” Dicky exclaimed. “What’s the point in going? All along, I have only wanted to act my best. It’s been many years and I’ve never received an acting award; I only want to win the hearts of the audience.”

He added that his main goal was to film a drama that he could proudly present to the viewers. Hearing his friends say they have to rush home to watch the show is already sufficient for him. “Life can be small, but it cannot be vain; I can play fewer characters, but I cannot do it sloppily,” Dicky said.

In addition, he revealed he would not attend any additional promotional events for his currently broadcasting drama The Learning Curve of a Warlord (大帥哥), as his schedule is already full. William acknowledged Dicky’s brotherhood as the Warlord actor skipped the award show but came to support him.

Dicky said, “I just finished attending the opening of Vivien Yeo’s (楊秀惠) new shop less than two hours ago when William called me to make myself available, so I could only agree.”

His close bond with his Warlord costars is apparent in his support for Vivien’s business. Indeed, he admitted he is grateful for them, and can only hope the audience will focus on each actor’s improvements in the drama. “For example, Tony Hung (洪永城) and Sisley Choi (蔡思貝) received praise, but Raymond Cho (曹永廉) is useless, he can almost smell the coffin,” Dicky joked.

While his drama did not win any awards this year, he publicly congratulated Joe Ma on the Best Actor award. “I often bump into him and his wife when I go swimming with my mom,” he shared. “His legs are really long – I’m so envious!”

When reporters asked if his previous statement – filming dramas until he receives an award – still holds true, Dicky did not deny it. However, he revealed he will return to the music scene next year, and plans to hold his own concert at the Hong Kong Coliseum.

Upon hearing this, William laughingly said, “Let’s talk about that when the Hong Kong Coliseum actually gives him a time allotment!”