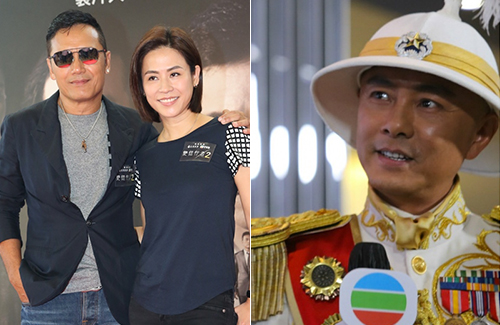 Some of the biggest stars in Hong Kong entertainment have gathered together this week for the 2017 Hong Kong International Film & TV Market, or FILMART, at the Hong Kong Convention and Exhibition Centre. The fair ends on Thursday, March 16.

TVB was one of the biggest content producers at the fair, bringing over 70 artistes and introducing 16 upcoming television dramas to the media, seven of them being anniversary dramas for the network’s 50th anniversary.

The first anniversary drama in the roster is Oh My Grad <老表，畢業喇！> starring Roger Kwok (郭晉安), Ada Choi (蔡少芬), and Wong Cho-lam (王祖藍), which is projected to air sometime in the early summer of 2017. Line Walker: The Prelude <使徒行者2>, prequel to the 2014 drama of the same name, may be next in line. The crime drama stars Michael Miu (苗僑偉), Moses Chan (陳豪), Jessica Hsuan (宣萱), Benjamin Yuen (袁偉豪), Pakho Chau (周柏豪), and Priscilla Wong (黃翠如).

Assistant General Manager of TVB productions, Felix To (杜之克), said, “This year is actually a very important year [for us], and each and every drama we’ve chosen to do has its own value. The anniversary time slot will start in July or August, and it will end in the first quarter of 2018.”

Felix To added that the long broadcast period of anniversary dramas may affect the broadcast date of the 2017 TVB Anniversary Awards. “Because the anniversary time slot is so long, it’s possible that we may postpone the awards show. But it won’t be too far ahead. We don’t want severe changes.”

Due to their long filming periods, Dicky Cheung’s (張衛健) The Learning Curve of a Warlord <大帥哥> and the blockbuster Deep in the Realm of Conscience <宮心計2·深宮計> will be some of the last anniversary dramas to air this year. Productions for both dramas will not be completed until the late summer.

“We’ll be going to Fujian to shoot the drama this summer,” said Dicky. “I’m not looking forward to that.” He laughed at his own misfortune at having to film most of his costume dramas in the heat, but added that some of his most successful dramas were shot during the summer.

Reporters told Dicky that his ex-girlfriend, Line Walker actress Jessica Hsuan, is interested in collaborating with him again. Dicky said, “She should have said that earlier! I don’t have a say at TVB, but I will not be against it! I am still friends with [my exes].” (What about your other ex, Elvina Kong 江欣燕? Do you mind if she makes a guest appearance?) “I’ve actually thought about this, but it really depends on the script.”

It has been said that Dicky’s costar, Tony Hung (洪永城), was seen going to the restroom with Dicky. The actor nodded with a laugh, “That’s true. I was lost.” (Together?) “Of course!” (You’ve seen it then!) “I rather not!” Bobby Au-yeung (歐陽震華), who headlines TVB’s other anniversary drama My Ages Apart <跨時代> with Moses Chan, joked about the incident where costar James Ng (吳業坤) had a visible bulge while accepting a music award on stage in 2015. Bobby said he has given James the nickname “Big Eagle” while Sammy Sum (森美) liked to call him “Burst”.

Former couple Kenneth Ma (馬國明) and Nancy Wu (胡定欣) got along really well while the two promoted Deep in the Realm of Conscience, sister production to 2009’s Beyond the Realm of Conscience <宮心計>. Kenneth, however, did not interact much with his current rumored girlfriend Jacqueline Wong (黃心穎), who also stars in the show and attended the event. Jacqueline said she’s not jealous of Kenneth and Nancy, also expressing that she doesn’t mind working with Kenneth as a couple on-screen, regardless of their real-life relationship status.