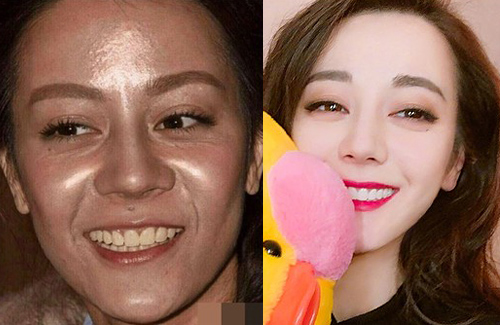 Since Dilraba Dilmurat <迪麗熱巴>, also known as Dilireba, debuted in 2013, she has been on the fast track to stardom due to her talent and beauty. Recently an anonymous netizen posted what appears to be a photo of Dilireba without makeup. There was heated discussion and disbelief as the photo was completely different from the beauty she was known for.

The photo was posted with just the caption “What everyone likes.” Though it was not specified who was in the photo, many netizens have guessed that it is Dilireba. The woman in the photo had a dark complexion showcasing many wrinkles and a gummy smile. She also had poorly applied makeup with excessive highlighting and messy hair.

There were many comments stating their shock and disbelief at how different Dilireba looked in the photo as compared to her usual beautiful appearance. Her die-hard fans immediately came to her defense declaring that the photo was maliciously photoshopped. They called for the leaker to not act high and mighty and to post their own bare faced photos for comparison.

However, the netizen calmly refuted, “Technically, I never mentioned that it was Dilireba.”