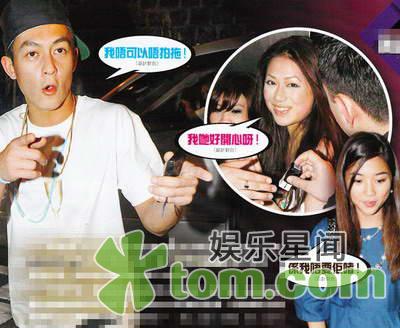 Edison did not respond directly as to why Vincy was not present at the CLOT celebration. Allegedly, Edison and Vincy may have separated several months ago. In April, Vincy took a break from studying in the United States to attend her grandmother’s funeral in Hong Kong . When prompted by reporters, she did not respond to inquiries regarding her relationship with Edison .

Edison may even have a new romantic interest in actress-turned-socialite, Lo Koon Ping’s 18-year-old daughter, Fiona Tong. Attending school overseas since she was twelve, Fiona is currently a student at the University of London , majoring in International Management. She often attends balls with her mother and elder sister. Allegedly, Fiona is interesting in pursuing a career in modeling and has appeared in a catwalk fashion show alongside Angelababy.

In response to the dating rumors between Edison Chen Koon Hei and her daughter, Fiona Tong, former actress-turned-socialite, Lo Koon Ping said that Fiona just returned to Hong Kong from London . She did not ask Fiona who her friends were, but expressed confidence in her daughter’s judgment. Jayne: Given Edison ’s dating history, it doesn’t seem as if he stays with one woman for long. He also seems to prefer extremely young girls. ? I guess his hard partying ways have not slowed down yet.