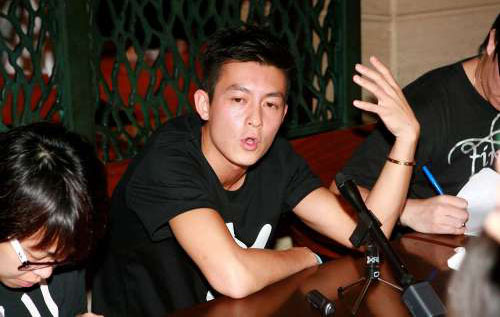 The day before, Edison appeared as a guest performer at Famma’s concert. At the celebration dinner last night, Edison revealed that he will release a new album in October. This marks Edison’s official return to the Hong Kong music industry!

Feeling Pressure Upon Return to the Hong Kong Coliseum

As the opening performer at Famma’s concert, Edison sang the song “Imagine,” but changed some of the lyrics. After his performance, he sat below the stage to watch the rest of the concert. Edison appeared engrossed and often stood up to dance. The audience seemed to welcome Edison ’s return and many teenage girls asked to take photos with him.

At the celebration party, Edison felt that Famma’s performance was qualified. Performing at the Hong Kong Coliseum again, Edison felt nervous and immense pressure. Was Edison happy on stage? He said, “I’m just talking.” Regarding the audience’s good reaction to his performance, Edison thanked his supporters and vowed to do his work well. Although he is unprepared to sing and film again, he noted the importance of everyone’s support.

As to changing the lyrics of “Imagine,” Edison denied that his intention was to ask the audience to accept him again. He emphasized that the will not test the audience’s reaction through another artist’s show. When his new music album is released in October, the audience’s reception will be apparent then.

In his new music album, eighty-percent of the songs are in Mandarin while twenty-percent will be in Cantonese. The album will be launched no later than October. Edison revealed that he will be writing all of the song lyrics in English and then hire translators to translate them into Chinese. “I have a lot of things to tell my fans directly, so I have to write my own lyrics.”

Did the release of this music album mark Edison’s official return to the Hong Kong music industry? Edison said, “I don’t know; did I leave before? I am not sure what it means to make a come-back. Let’s see how things turn out. If you say I am making a come-back, then okay, I’m back!”

Earlier, Edison vowed to earn $100 million (HKD) before getting married. He smiled, “I have to earn more money first before discussing marriage further.” Over the last few years, Edison realized that it is difficult to quantify how much money is enough. Money can not purchase happiness nor love.

Was Edison’s girlfriend, Vinci Yeung, aware of Edison ’s impending new album release? Edison laughed and said Vinci did not listen to his songs and did not watch his movies. He considered that Vinci loved him for being himself, rather than his movies and songs.

Jayne: Edison ’s come-back is inevitable. Honestly, I don’t really care about his scandalous past as long as he is able to deliver improved music and film performances. All the female celebrities embroiled in the nude photo scandal have moved on with their lives; it’s time Edison did what he wanted to do with his life too, rather than “hiding” in the United States .

Considering the uninspired wave of the latest newcomers, it’s good to have him back. I prefer watching him in films rather than his music though.