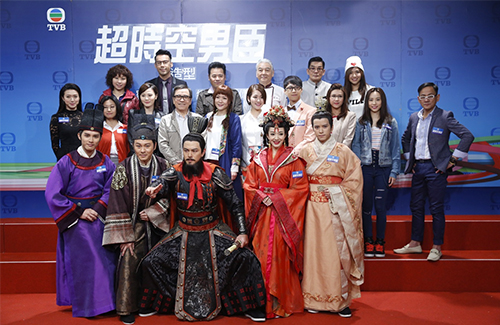 Produced by Marco Law (羅永賢), Edwin Siu stars as the Ming dynasty hero Yuan Chonghuan who, along with the imperial inspector Zuo Guangdou (Raymond Cho) and the eunuch Li Jinzhong (Matthew Ho), get transported to the future as they attempt to search for their princess (Grace Wong). The trio land in present-day Hong Kong, where they end up as background actors in a film studio. At the press conference, Edwin appeared as his character Yuan, wearing a general’s uniform and a large beard. He said, “I’ve never looked this outstanding and heroic before.” Asking if his girlfriend, Priscilla Wong (黃翠如), has seen his look, Edwin said, “She asked me why I sent her a picture of Law Lok-lam (羅樂林). And honestly, I do think I look like him.”

Raymond said, “Law Lok-lam caught the shingles too. What a coincidence!”

Last month, Edwin shared that he was suffering from shingles due to overwork, but has now recovered. “I’m surprised to hear that a lot of people at TVB have also caught the shingles,” he said.

Reporters asked Raymond if he too had suffered a similar fate. The actor laughed and said, “I never had shingles before!” Edwin quickly butted in, “But you’ve had many other things! And they’re all infections too!”

In regards to their heavy period costumes for the show, Raymond said, “We’ll be shooting this in the winter, so it’ll be a lot more comfortable. If we shoot this in the summer, all the snakes [shingles] will come out.” Catching Raymond’s sarcasm, Edwin refuted, “Raymond’s been working out a lot. He was fat before, but for this show, he dropped ten pounds.” Kristal Tin, who portrays a present-day character in Time-Traveling Officials, appeared at the press conference in pigtails. The 39-year-old actress joked about her outlandish look and said, “I’m playing a youthful character. Strange, right? Don’t you feel like you’re watching a horror film?” Kristal said she has already read the script, and is quite pleased with the story. Though Time-Traveling Officials will be Kristal’s third collaboration with Edwin, she doesn’t think their team-up would be boring to the audiences. “Edwin and I are playing different characters now. Edwin’s a very funny guy in real life, so he’ll have no problem with comedy.”

Sharing that her character is a third-generation successor of a restaurant, Kristal will wear clothes that have a traditional Chinese style. Asking if her husband Chapman To (杜汶澤) has seen pictures of her costume fitting, Kristal said, “I’m afraid that he’s going to want me to wear them home!”

“It’s a bit disappointing,” admitted Kristal. “It wasn’t an easy drama to do, and the crew worked really hard. I hope the ratings will slowly get better. I’ve tried my best as Chan-kai Ying and I’ve completed my mission. I am satisfied with my performance.”