Eliza Sam Saving Up to Buy a House 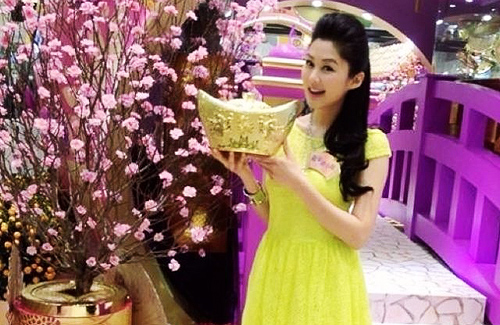 After a breakthrough in 2012’s Divas in Distress <巴不得媽媽…>, Eliza Sam (岑麗香) became one of TVB’s most popular rising stars of 2013. Dubbed as Hong Kong’s new “little rich woman”, Eliza is frequently invited to public events and functions, earning lucrative appearance fees. At a public function yesterday in Tseung Kwan O, Eliza admitted that she has been saving money, hoping to purchase a house as soon as possible.

“I don’t think I’m really qualified to be called [little rich woman],” Eliza Sam said. “However, my parents have taught me about saving money since my youth. I hope that I will be able to save up more money this year to be better-prepared for my future.”

Asked if she has plans to purchase a house, she said, “That has always been a goal of mine. I do want one myself, but I think I have to take it slowly. I have to do more research first.”

Pointing out that Hong Kong’s real estate prices are really expensive, Eliza agreed and remarked that she still has not saved enough money for the down payment.  Eliza specified that the size of the house does not matter, as long as she can find a comfortable place for her parents to stay at when they come to visit Eliza in Hong Kong.

Eliza also mentioned that she is excited for the upcoming Lunar New Year, as it will be her first year to pass out red envelopes. “I will be spending [the Lunar New Year] in Hong Kong. I anticipate passing out red envelopes! Many staff members, colleagues, and the media have supported me over the year, and it gives me the strength to continue to work hard. I want to pass them out to give everyone my blessings.”

Also present at the event was Elanne Kong (江若琳), whose upskirt photos were circulated widely across the Internet. Elanne appeared at an event earlier where she stood on a mirrored floor panel and accidentally exposed herself to photographers. Hurt by the revealing photos circulating, Elanne said she will take adequate precautions in the future.

4 comments to Eliza Sam Saving Up to Buy a House