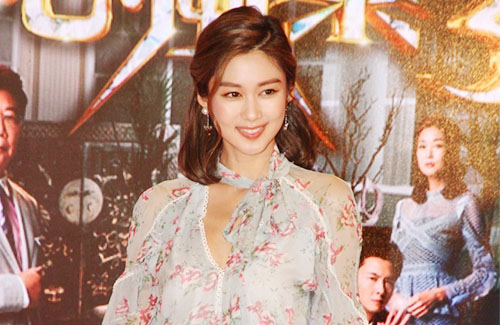 Despite TVB’s policy of limiting unnecessary sexiness, the first episode of Heart and Greed showed Bosco Wong and Vicky Wong (陳偉琪) making out in bed. Eliza also shared that she would soon make an appearance in a bikini. Sharon Chan revealed that she had filmed a bed scene with Michael Tong, but is unsure if TVB would air the original cut. Despite these revealing scenes, Lau Ka-ho emphasized that Heart and Greed is a family drama.

Eliza, who was originally set to star in the upcoming drama BB Has Arrived <BB來了>, has been replaced by Ali Lee (李佳芯). On why she turned down the TVB drama, the 33-year-old explained, “Because I cannot speak Cantonese that well, I have to spend extra hours translating my scripts before I can memorize it. That takes a lot of time and energy, in addition to our 20-hour work days. I also filmed [Heart and Greed and Apple-colada <果欄中的江湖大嫂>] back to back. I want to rest well so I can show a better performance for you guys next time.”

Perhaps Eliza would also want to use this opportunity to chase for a child? “You’re talking about this again! I’ll leave this to the hands of God. There’s no pressure!”