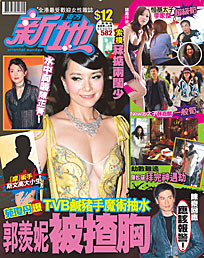 This week’s Sunday Magazine continues the speculation of the identity of TVB’s “Pervert Magician,” an actor who takes advantage of female artists while pretending to perform magic tricks. Since former TVB artist, Kingdom Yuen exposed the existence of an actor who physically groped multiple TVB actresses, it has been a hot topic in many tabloids.

Kingdom did not reveal the identity of the “Pervert Magician,” but rather dropped hints that he was taller than Bosco Wong Chung Chak and hosted many travel programs. While performing magic tricks, he will “accidentally” touch the women’s bust. Allegedly, Sonija Kwok, Tavia Yeung, Sharon Chan, and Astrid Chan were victims of the “Pervert Magician’s” tricks.

Speculated by tabloids to be the “Pervert Magician,” Ellesmere Choi can be seen in the current broadcast of “The Winter Melon.” Originally cast in Myolie Wu’s new series, “His True Father” 《 巴不得爸爸 》 as a doctor or other professional role in a cameo appearance, Ellesmere’s screen time has now been cut by TVB due to his suspected involvement in the sexual harassment claims.

TVB will find a suitable actor to play the role originally offered to Ellesmere, but the character’s screen time will be reduced.

Apparently many TVB crew members were aware that the “Perverted Magician” tried to take advantage of numerous female artists. One source said, “He likes to target upcoming actresses, so that they would be afraid to speak up. Many years ago, he collaborated with Tavia Yeung in a series. At the time, Tavia was still a newcomer. He requested the Director to add intimate scenes between himself and Tavia. During filming, while hugging Tavia, his hands roved down to grab her butt. Afterwards, Tavia complained of the incident.”

Sharon Chan’s friend said, “Sharon has a tomboy personality and is very friendly with male artists. One time, while the ‘Pervert Magician’ was hugging her waist, his hands brushed her bust. She was scared and bounced away. Afterwards, she felt disgusted by his actions.”

However, since TVB has ordered artists to stop discussing the “Pervert Magician,” both Sharon Chan and Tavia Yeung did not provide further comment regarding the alleged incidents.

“Each week, he would bring all the children’s program department to get a copy of TVB Magazine. It may appear that he is performing a kind deed, while in fact, he was trying to get to know the women working in the management department. Apparently, one of the females in the management department did fall for him and helped him transfer to the drama department. Actually, he already had a girlfriend at the time. However to improve his career opportunities, he continued to see both women at the same time.

“After transferring to the drama department, his personality became even more flirtatious. He liked every woman he met, especially those that could improve his career opportunities. His opportunities grew; however due to the exposure of his sexual harassment antics in the past two years, his work has diminished.”

Since the “Pervert Magician” incident surfaced, Ellesmere Choi and Lai Lok Yi, who know how to play magic tricks have been included in the suspect list. In addition, the tall Moses Chan, Joe Ma and Ron Ng were also included.

Joe Ma: “I only fit the tall description. I don’t know magic tricks and never performed them for female artists. I hope Kingdom would provide more details of the sexual harassment incidents and provide testimony for the police.”

Ellesmere Choi: “If this is true, I will not respond. Let’s see what evidence is uncovered first.” One day after speaking with Virginia Lok, Ellesmere appeared to be tired. Regarding the details of the meeting with Ms. Lok, Ellesmere said, “It was just to understand more details!” Several days later, when the reporter tried to contact Ellesmere, only his voice mail picked up. His manager said he will not respond further to the incident.

Lai Lok Yi: “My height is over 180 cm. I know magic tricks, but I never filmed a travel program. The incident did not affect my spirits. There is no need for me to explain. People who know me, know what my personality is like. The source who revealed the incident was not very clear. If there is such a ‘Pervert Magician,’ I hope he gets due punishment.”

Moses Chan: “The most important thing is to prevent additional female artists from being sexually harassed, rather than guess the identity of the ‘Pervert Magician.’ The previous victims should stand up and unite together to prevent future sexual harassment.”

Ron Ng: “I don’t think Joe Ma knows magic tricks. Many girls will not speak up because they are afraid. If I witness any sexual harassment, I will speak up. But it also depends on the girls’ reaction. If they come out to testify, then this incident can not be ignored. But I don’t know magic tricks.”

Jayne: The article from 忽然一周 # 706 unabashedly alluded to Ellesmere Choi to be the “Pervert Magician.” The reporters only included commentary of other artists such as Joe Ma, Lai Lok Yi, Moses Chan, and Ron Ng to narrow down the violator as being Ellesmere. The issue also published many photos linking Ellesmere to the actresses involved in the sexual harassment incidents.

It is a shame that TVB did not adequately handle these sexual harassment incidents. Obviously, they have taken place over a number of years and many actresses were involved, more than the article mentioned. TVB is typical in their response to any negative rumors, by requesting artists to keep quiet and cover the truth.