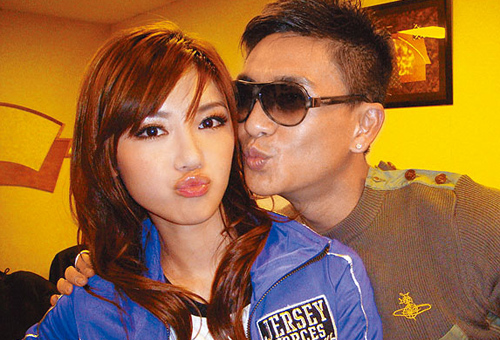 Hong Kong tabloids recently claimed that Bosco Wong’s (黃宗澤) infidelity is the reason to why he broke up with his girlfriend of 8 years, Myolie Wu (胡杏兒). Bosco’s three rumored mainland Chinese girlfriends, Liu Yan (柳岩), Tiffany Tang (唐嫣), and Song Xinni (宋新妮), all actresses from The Woman Above the Bread Tree <麵包樹上的女人>, have denied any romantic linkage with him. Adding to the list of denials is Elva Ni (倪晨曦), a former winner of the 2005 Miss Toronto Chinese Pageant. Elva first met Bosco in 2006, who was a guest performer at the Miss Toronto Chinese pageant. Bosco openly praised her beauty and managed to get her phone number. Elva also posted an intimate photo of her closely hugging Bosco on Facebook. Tabloids alleged that the pair briefly dated after Elva won the pageant.

Yesterday, Elva attended a Thai boxing event with TVB actors, Raymond Wong (黃浩然), Lai Lok Yi (黎諾懿), and model, Zelia Chung (鐘浠文). Elva denied the tabloid’s allegations and clarified, “I met him when we worked together in Toronto, but I have not contacted nor met up with him since coming to Hong Kong.”

However, Elva was not angered by the accusations. She praised Bosco instead, “He’s really polite, treating everyone really well.” When asked if Bosco treats all girls very well, Elva nervously said, “I don’t know.”

Elva also added that her ideal type is someone who is filial.

Liza Wang (汪明荃) attended a radio interview earlier to promote an upcoming contest to recruit new Cantonese opera performers. Liza, who previously worked with Bosco and Myolie in the War of In-Laws <我的野蠻奶奶> franchise, was said to be the ex-couple’s matchmaker. Although Liza is saddened by their breakup, she praised the couple’s maturity, “They are both mature adults, and I think they handled [the break-up] really well.”

In related news, Liza’s new comedy drama, A Chip Off the Old Block 2 <巴不得媽媽…> will be airing in late August. She expressed that she will be busy promoting the drama, and will not have much time to perform in other Cantonese opera concerts.