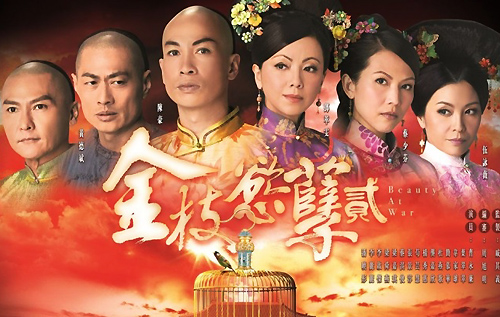 Alright, this are my episodic thoughts for Beauty at War episode 2.

Forget about last night, forget about all the disappointment and let there be a new beginning. This was what I was thinking when episode 2 was showing for Beauty at War.

I have to admit that I did have a slightly different approach of this episode, as I find this episode to be slightly better than the first episode, but I still find it draggy and boring as it was mainly focusing on Moses, Alice, Eddie and Ada.

To be honest, I found it weird to think that Moses is like a psycho on gambling. I know that Moses was a good opera artist, but how could he be so smart at gambling? It’s not realistic, but I can find a reference of Moses from War and Beauty. In the first series, he plays Hung-Mo who is ambitious and would risk his money for gambling in order for a chance to strive a fortunate, but however he only loses all the time. He would win the games ten times consecutively.

Lau Ping questioned whether Moses was really that lucky for winning so many bets and so he bets differently to Lau Fei (Moses). Obviously, Moses won the bet and Lau Ping is left red-faced and angrily leaves. Lau Fei askes the gambler if Lau Ping owed the casino a lot of money. The gambler said that Lau Ping’s wife had to sell her jewelry in order to pay his debt, in which Lau Fei offers to pay for Lau Ping’s debt, and wants to know where the couple lives. Lau Ping’s wife here was Alice Chan (Kwok Yuen Ching). I am happy to see Alice Chan here as her performance as a villain from Justice Attack was outstanding and made me want to see her more in here. I don’t know why Jonathan Chik decided to give Alice Chan such a minor guest role, but I guess it’s better than nothing.

Alice has a conversation with Eddie Kwan and talks about how she deserves to be in the situation as she in now. She begs Eddie Kwan to allow her to have an opera performance with Lau Fei (Moses) and after that she would never see him again. Eddie Kwan eventually accepts the request and therefore Moses had a performance with Alice Chan. This was the best moment in the entire episode, but I am sick of the opera performances. I particularly start to dislike Master Kiu in this series (the master of the theater) as he is selfish and was really opposed to Alice and Moses having a performance.

Overall, nothing really dramatic happened and nothing special to keep me watching to watch more. Good job for Alice as she did do a decent job, but I didn’t feel like there was any climatic moments until near the end where Muk Do Yee (Katy Kung) follows the flute song sound to see who is playing it. The scenes about the opera were rather uninteresting and dull, where there was just a lot of talking and the plot wasn’t really going anywhere. Hm… I am starting to question whether Jonathan Chik and Chow Yuk Ming should have even made a sequel? I will still continue to watch no matter what happens.