Eric Tsang (曾志偉) and Wong Cho Lam (王祖藍) have left TVB for some time now, and it is even speculated that the company banned Eric. However, TVB’s chairman Thomas Hui (許濤) refuted those rumors by officially announcing that the two will be returning to TVB in managerial roles.

Eric will be serving as TVB’s new Deputy General Manager and special advisor to the administrative committee. He is tasked with taking charge of the variety and informative programs and nurturing TVB’s next generation of artistes and crew members. Cho Lam will be taking on the role of Chief Creative Officer to assist Eric in the development of upcoming variety and infotainment content.

In regards to Eric’s new title, he delightfully expressed in an interview, “First, I am honored that TVB’s executive committee and chairman Thomas have entrusted me with this role. I am very happy to be returning to the TVB family, where I grew up in the industry. It is so nice to reunite with old coworkers and be able to work with them again.”

Given that TVB will be stepping into its 55th year, Eric continued to share his excitement for being a part of the journey. He hopes that he can continue to touch the hearts of his audience, as well as share his many years of experience in the industry. He said, “I want to incorporate some new ideas into cultivating new talents so that we can deliver higher quality content and also more diverse programs. We want to bring more joy to people and uphold TVB’s value for giving it our best!”

Cho Lam echoed similar sentiments and expressed, “Thank you to TVB and Thomas for the invite; it is such an honor. I will do my best in this role to repay TVB and also the Hong Kong audience. I especially want to thank Eric because ever since I started developing my career in mainland China, he gave me a lot of tips and advice. As a result, I was able to grow well, and I hope that I can do that with TVB’s new generation as well.” 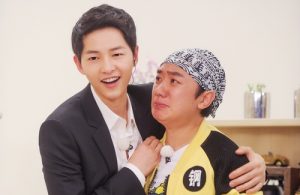 He added that he has gradually learned more about digital platforms and operations, including live broadcast, e-commerce, and Augmented Reality/ Virtual Reality production, in recent years. Along the way, he became acquainted with top production teams from different parts of the world, such as Korea, America, and Japan. He hopes to use his newfound knowledge and various innovations in the work that he produces at TVB.

Cho Lam shared, “I want to strengthen program creation and cross-platform production, especially since we are entering the 55th year. We will need to begin to seriously think and plan how we can deliver positivity and entertainment to our Hong Kong viewers.”