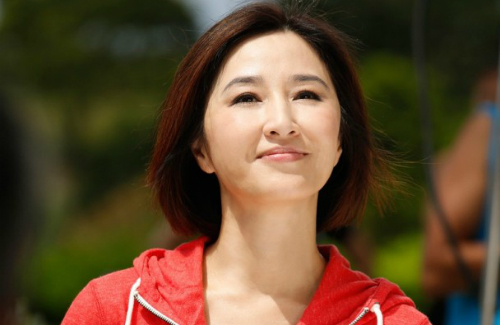 After the birth of her daughter Brittany Cheung (張童) in 2006, veteran actress Esther Kwan (關詠荷) gradually stepped out from the limelight to become a full-time mother. As the spokesperson for a milk formula brand, she emphasized the importance of good health by shooting a sporty advertisement that showed her jogging outside.

Esther shared that she started taking good care of her health after witnessing her 80-year-old mother fall and break her ankle. Such injuries are severe for the elderly, and Esther’s mother had to receive extensive treatment and care. This made Esther realize that there is nothing more important than being healthy.

At her current age of 51, Esther received praise that she has always looked the same. She laughed and expressed that she tries to take good care of herself by maintaining a balanced diet scarce in fat. Esther also enjoys the process of exercising and insists on going for a run every day. During her spare time, she likes to dance and play badminton.

Earlier, Esther’s husband Nick Cheung (張家輝) complained during a function that she brought their daughter on a trip to the United States without him. Esther laughed and explained, “He was busy shooting a film and couldn’t come with us in the summer. Brittany and I had to ditch him and go on our own. My daughter kept asking me to spend more time with her, so I’m trying to work less.”

Esther added that she loves to engage in parent-child quality time, and would often bring her daughter hiking or accompany her to extracurricular activities. Her biggest desire at the moment is to devote herself to taking care of her family.

5 comments to Esther Kwan and Daughter Vacation Without Nick Cheung